Wonder Boy in Monster World (aka Wonder Boy V: Monster World III) is a side-scrolling action-adventure game, much like its predecessor Wonder Boy III: The Dragon's Trap (aka Monster World II). Set in the same world hundreds of years later, Monster World III stars a new hero named Shion as he follows Bocke Lee Temjin's footsteps and goes on a journey to save the world. The shape-shifting gimmick from the previous game was replaced with the addition of NPC companions who will help Shion explore various locations throughout the course of his journey. 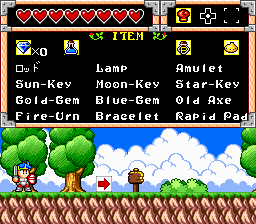 Under the menu are some unused plot-related items that cannot be obtained in normal gameplay. They can be unlocked with Pro Action Replay (PAR) codes. The Rod has no known effect on gameplay. With the Rapid Pad code turned on, when the Elder Dragon gives you the Bracelet, it does not go into your inventory. But if the code is toggled off, so you still have the Rapid Pad, there is no other known effect. This suggests it may have been programmed in between The Sphinx boss and the Elder Dragon. The codes listed below work on the American and European versions.

Rod (FF958C:0001 or FF958D:0001):
Untranslated in the localized versions; it is written ロッド, which suggests it was removed fairly early in development. Commonly refers to a fishing rod, but may also be translated to Cane. 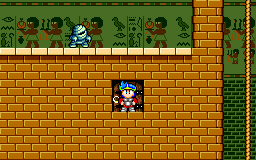 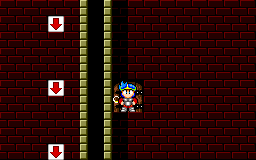 This door drops Shion neatly ready for the second stage of the platform jumping challenge. 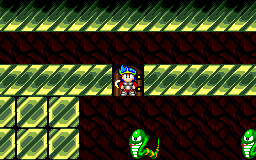 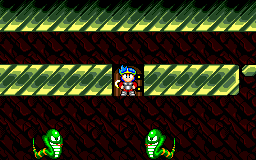 These doors place Shion halfway through the volcano. They cannot be re-entered.

The return paths have backgrounds which are covered up, these are the only screens that have this. 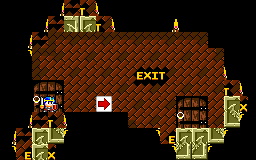 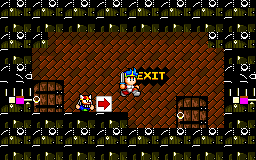 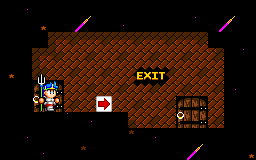 Many areas lock the vertical position of the camera, instead of following the player. Using the Pro Action Replay (PAR) code 009785:0000, it unlocks the camera to reveal unseen scenery. Some examples below:

009785:0000 unlocks the horizontal position of the camera. This shows that two rooms in the Ice Palace are actually shared on the same screen, but only one chest is spawned at a time.

Because you start with a weapon that always covers up your character which you cannot unequip, you never see the back of the character's head. Here are the ripped sprites without the weapon for idle stance, swimming, taking damage, side attack and ducking.

The door was accidentally placed inside part of the wall.

The hidden shop keeper is placed 4 pixels underground, hiding his feet and making him short.

In this ending scene, the middle three NPCs are at least 1 pixel too low. You can also never see the entire sprite for the bald man.

Some items which are found in chests also have a sell price stored in the game code which cannot be seen without hacking.

The following names in the ROM word library go unused: Castle of Illusion, Prince of the Devil World and Ice Capital.

Many changes were done during the localization of the Genesis/Mega Drive version, mainly to increase the challenge. These changes didn't carry to the localized versions of Dynastic Hero, the later released PC-Engine port.

In the Japanese version, running out of hearts merely sends you to the last inn you visited, with no penalty to your money or progress. As such, players would "suicide" this way after a boss to avoid backtracking.

The American and European versions give you a newly-added Game Over screen instead, after which you get booted back to the title screen and lose any progress since your last save at an inn.

In the Japanese release, the bunny head floats around the screen. In the western release it floats around and drops fire on the ground.

Bio-Meka was incredibly easy in the Japanese version: he was basically a sitting duck on the right side of the screen occasionally firing some laser bolts. The US version added more laser orbs in the background and a fast-moving floor with a chainsaw moving back and forth. In the Japanese version, the NPC continues talking after you are healed, in the US version he disappears immediately after you are healed.

In the later release, they fixed the position of a chest, instead of having an invisible wall.

The Potion and Holy Water sprites have been changed in the western release. But the Medicine sprite remains the same. This change made it easier to differentiate between the two.

In 1994, the game was localized (like the previous two Monster World games) as a tie-in licensed game called Turma da Mônica na Terra Dos Monstros ("Monica's Gang in Monster World"), with the Monster World title finally used... somewhat. Monica replaces Shion in the title screen with her threatening blue doll, which is her main weapon. Weapons and many plot-relevant NPCs have been replaced by items and characters from the comic; as a result, their graphical style clashes with the anime feel of the unaltered NPCs. The port is based on the western release of the game rather than the Japanese release, as evidenced by the presence of the Game Over screen.

Besides Monica replacing Shion, Sega's copyright was demoted from a logo to plain text, and copyrights for Tec Toy and Monica's Gang creator Maurício de Sousa were added. They didn't bother updating the shadows on the rock under Shion's feet for Monica.