This is a sub-page of Yume Nikki.

These unused graphics are found in the CharSet folder, which generally consists of object and character tiles.

These graphics have (to date) not been found to be used in any version of Yume Nikki.

The chair is able to face two other directions on its own. The used version is in the middle for reference.

An unused sprite for the trash can with paper inside.

An unused version of the Hat & Scarf Effect found in Block World, finished but left unused. The Hat & Scarf itself is found on top of a stand, and there is also the stand with nothing on it. In the middle is the in-game version for reference.

The Eye Palm can also face the other direction like the other arms, but this goes unused.

An unused version of the Umbrella Effect on its side, along with a sprite where it is open without a handle. 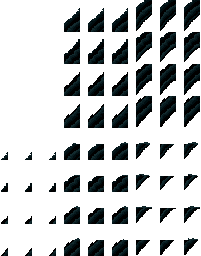 Some tiles that appear to be some kind of dark water. It wouldn't be out of place in the Sewers, but it may have been intended for another area.

Alternate colorations of Kinoko-san from FC World exist, but are never used. The first mushroom is a duplicate from the used graphics. It is possible to see the unused variants through a bug, but only their standstill sprites can be seen this way.

Another variant of the elevator, plus an unused gray version. The elevator that is used is on the left for reference.

The friendly Toriningen in The Mall has sprites for facing other directions, but it only ever faces forward.

Some tiles of the spaceship, Mars, and the underground area of Mars that never get used.

There are differently assembled variants of one of the floor patterns in Neon World, but the version that is used is split into three pieces per color. This is done to allow it to cycle through the colors by simply having the tiles "spin around" in place, probably to make the animation easier to implement.

The submarine fish that is sometimes visible in the Sewers has sprites for what appears to be an animation where it would have risen up from the water.

There is also an unused white version of the submarine fish, but it lacks a shadow.

A weird-looking object comprised of two CharSet tiles meant to be put together. It bears faint similarities to Masada-sensei's spaceship, but it's probably just a blob. The image on the right is how it would be animated in-game.

These graphics have been found to be used in older versions of the game, but are unused in v0.10.

The flabby-looking sprites were used in v0.09...in a rather interesting scenario.

The image displayed on the TV in the dream world in v0.06 still exists in v0.10 on the same CharSet.

A funhouse mirror that used to be located in Hell to obtain the Fatten Effect in versions prior to 0.10. Its only appearance in v0.10 is in the debug room, and was replaced with the Strober NPC in the Docks.

CharSet graphics of NASU. The graphics that are used are actually in the Pictures folder, rendering these sprites unused.

These graphics were part of an an unused event involving NASU in v0.09.

These tiles were used in the old version of Neon World, but do not appear anywhere in the new design of the world created in v0.10.

In older versions, the stairs used for the ending are composed of two CharSet tiles. While v0.10 changed this to use three tiles instead, they still look the same when assembled, making the difference unnoticeable in-game.

A static version of the boombox with a different design. It was used in v0.04, but was replaced with the animated boombox by v0.06.

The taller traffic cone graphic used up to v0.09 is still in v0.10, but is unused in favor of a shorter cone.