From The Cutting Room Floor
< A Hat in Time (Windows, Mac OS X)
Jump to navigation Jump to search

This game has received quite a few patches, and has changed a lot since release. The most noticeable differences will be documented here.

This build also changed the locations of two Time Rifts: the Time Rift in Alpine Skyline near the Windmill, and the Time Rift inside the sewer pipe in Mafia Town. Both polaroids for these Time Rifts were updated to accommodate these changes.

By this build, a secret location in Alpine Skyline had been changed dramatically. At the Goat Outpost Horn, there's a hidden area housing a Brewing Yarn collectible inside of a makeshift wooden birdhouse. In the initial release of the game, this structure was actually constructed out of BSP instead of static meshes, and the method of accessing the collectible was by hooking onto a floating Subcon Noose. By December of 2017, this structure was remade with static meshes, and the way to access the secret was changed to a springboard. The house's wood textures also changed, becoming a much brighter shade of brown. Two little planks of wood on the new version are still leftover from the BSP version, however.

Another notable change that occurred by this build was the overhaul of the lit cherry bomb material effect. When the final game launched, the cherry bomb effect much more closely resembled the Beta's appearance, with it flashing red when lit. By December of 2017, that effect was replaced with a much more dynamic effect, showing a peach-colored pulsing effect on the cherry instead. The material for it still have nodes for the old flashing effect inside, however, but they are disconnected.

Found in the files of Modding Beta builds between January 6 2018 and January 9 2018 is an early version of the music that plays in the spaceship when near Snatcher:

This version is less than half the length of the finished version, falling very short of the length to match other spaceship variants. To an untrained ear, the early version may sound the same as the final, but it's actually slightly different. The early version was imported on January 3 2018, while the final version was imported late on January 9 2018. This version was actually used for a secret on the A Hat in Time website, where clicking on a certain part of the page would lead to a page with Snatcher smiling over an image of the Death Wish map while playing this music.

This build is the first main branch build to add PBR, a new type of metal shader backported from Unreal Engine 4. PBR would become heavily used in The Arctic Cruise and Nyakuza Metro later on in development. Prior to this update, PBR was much shinier, as can be seen in the screenshot below, which is from January 2018. 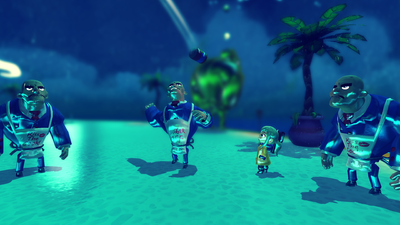 Also later found in the Deep Sea Rift in the May 28 2018 DLC 1 Leak Build is an earlier version of the Rift Collapse music used in the final game.

The two versions are identical in composition except that the final's was made to loop more within the track, to prevent it from awkwardly looping in the final game. It worked at first, but nerfs to the Rift Collapse timer speed in Peace and Tranquility would cause the song to no longer be long enough for the death clock, allowing the player to hear its jarring loop in-game.

The summit of the Tower of the Goats gained some Pons and additional details by this build. The newly-added Pons and purple decals at the base of the spinners were added to help uncertain players figure out what they're supposed to do when reaching the top of the tower, as some players reportedly had trouble spotting the spinners.

This build, as mentioned in the changelog for it, completely overhauled the Relic Finder Badge into the Compass Badge. Thus, all of the original and unique graphics made for the HUD for the Relic Finder Badge went unused in this build. A full HUD Element previously appeared in the bottom right corner of the screen, using the same map graphic from the unused Sand Travel Map HUD.

Its own unique graphics:

When the map would detect a relic, it'll place a pin for it on the map and try to direct Hat Kid towards it with different arrows. 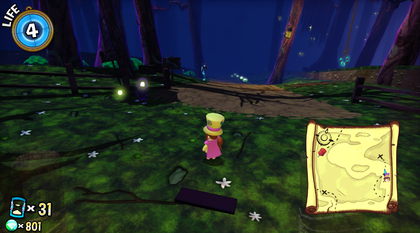 And when the level has no more relics to find, it'll instead display "No Nearby Relics". 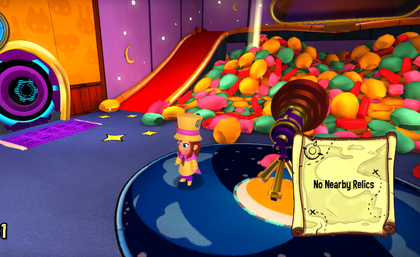 A few decorations and effects were removed from the game in this update, including an NPC at the start of Subcon Forest. 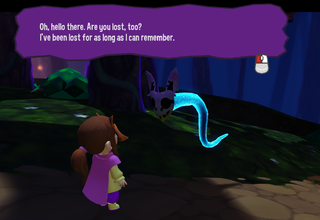 This Dweller, the only one you could talk to in-game, was removed. His dialogue was thrown out, as well.

Prior to DLC 1's release, a couple decals in Subcon Forest had a pulsing effect. For whatever reason, the nodes in their parent material that handle the pulsing effect were disconnected. 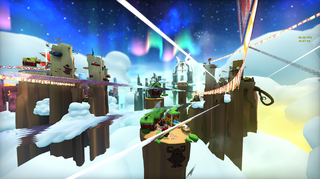 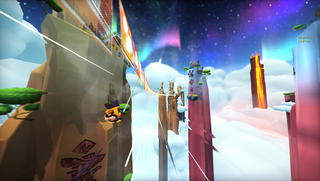 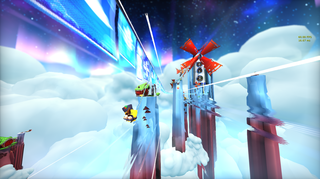 Several background mountains in Alpine Skyline lost collision, which resulted in numerous decals that were plastered onto them not showing up in-game anymore. The mountains that lost decals were the ones along the path to Yellow Band Hills, Serpentine Bird Horn, and The Windmill, respectively. There were also two Goat NPCs on a mountain along the path to Yellow Band Hills that started constantly falling into the void, despawning before the player could ever see them. Thankfully, an update to the game in 2021 fixed the Goats falling to their deaths and restored the mountains missing their decals near Yellow Band Hills. The other mountains are still missing their decals in the current final game. 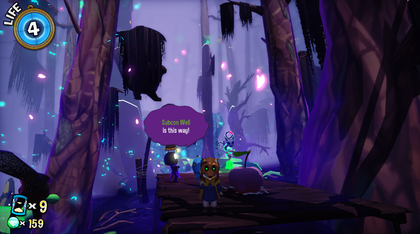 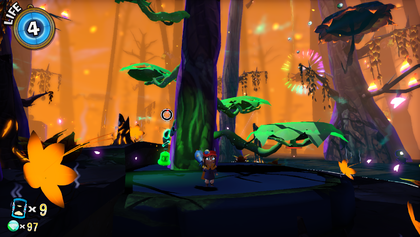 By this build, a glowing pink cherry blossom particle that can only be seen while the particles are inside of a dweller sphere, which covered a large part of the forest, was completely removed from the level. These cherry blossom petals still appear in one of the contract photos for Subcon Well.

The aurora borealis in Alpine Skyline disappeared by this build due to culling distances being tightened up. An update in 2021 that also fixed some mountains missing collision made the aurora borealis visible again, thankfully.


Only present in this build of the game is an early version of the metro's hub room on the Spaceship. It can be found floating off away from the main area, much like the DLC 1 room. The room's design in-game appears as a black box with some wires near the top. There's also some flat plane models that use the default texture. Also present in the level is two cubemaps for the room, which show a much more completed room design than the one that appears in-game. This is because the room uses assets from Nyakuza Metro, which are prevented from being cooked in due to anti-leak measures deployed by Gears For Breakfast. This early version of the room was present in the game from this build until the release of DLC 2, meaning it stuck around for several months. 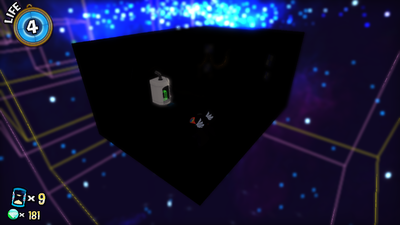 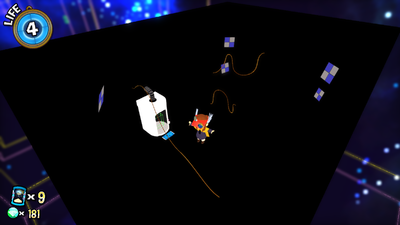 A view of the room in-game, with both lit and unlit lighting. 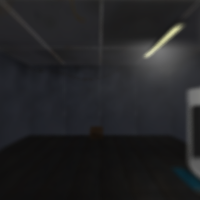 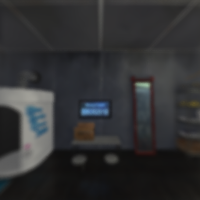 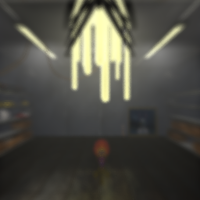 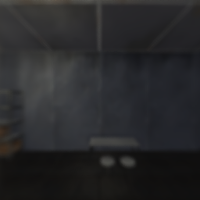 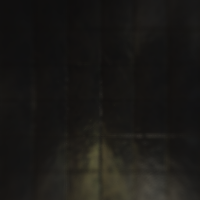 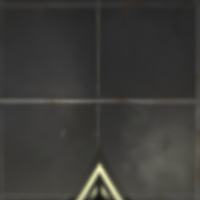 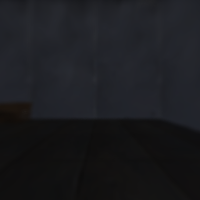 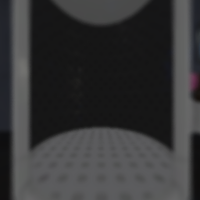 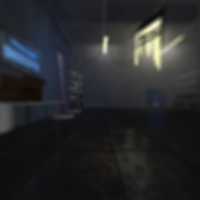 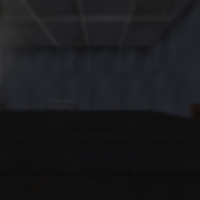 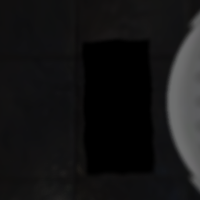 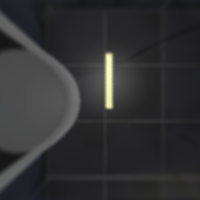 The two cubemaps for the room, showing its design more resembled Empress's jewelry shop interior than a unique station with benches and a cat trains running through it. The DLC 1 elevator is used as placeholder for accessing the room. There is a trigger volume inside of the elevator in the room, but touching it does nothing.

Early localization found only on the initial release of the Nintendo Switch version, prior to any patches, is present for Nyakuza Metro and Online Party!

Some extra details were added for the joining and leaving messages. The early text also calls it 'ghost party' instead of 'online party'.

"Group" was changed to "Party".

A rather hilarious placeholder line is present for the description of the Online Party machine.

More funny placeholder lines. The first line refers to the mode as "Ghost Party", which is what Online Party is called internally. It's possible that at this point in development that "Ghost Party" was the current official name for the mode.

The 'Filters' section of the new DLC 2 camera was changed to 'Style'.

The generic names of the poses and faces Hat Kid can make in the camera mode were given proper names for the final version. A 9th expression was also added for the final, called "Fed Up".

Online Party emotes are present in this file instead of the 'ghostparty.int' file. Included is localization for the unused and removed "Join me!" emote found in the December 4 2018 build.

The metro ticket items only have generic names at this point, and match up with the map file names found in the September 29 2018 build that leaked the very early version of DLC 2.

Localization is present for the Metro Cats at this point, but this is all there is inside the file. The text describes a scrapped scenario where Hat Kid has to take pictures of certain areas of the metro for a cat, although to what end is unknown. The text also depicts an early way the Metro Cats once spoke, often ending sentences with "nya". No Metro Cats speak this way in the final version at all.

Two localization files for Empress, one of which (empress_metro.int) does not exist in the final version. The contents of both files is the same: early dialogue for Rush Hour. At this point in development, there were only four Time Pieces to collect in the level prior to the finale, instead of eight. The manholes for the level were found to exist as early as December 2018, indicating that all of this localization is leftover from sometime before December 2018, but after September 29 2018. It also appears that Hat Kid would've stolen them back one by one during the level, instead of snatching them all up at once before the Act began.

Retrieved from "https://tcrf.net/index.php?title=A_Hat_in_Time_(Windows,_Mac_OS_X)/Version_Differences&oldid=1350344"
Categories:
Cleanup > To do
Subpages