Animal Crossing: New Horizons is a game in which you rapidly deprive an island of its natural resources in order to craft tools that never stop breaking.

Unused room IDs exist for additional rooms for the Museum have existed since launch. Haniwa is the Japanese name for Gyroids.

These are normally unseen in-game. Every room has a white skybox around the modeled area. 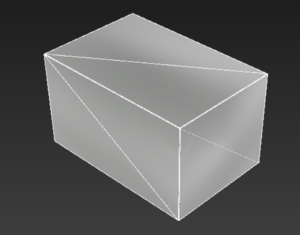 The Skybox around the small yellow tent you use when you first start the game. Inside is the room model. 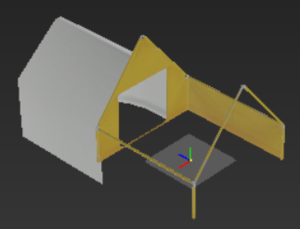 The same model with the skybox removed. 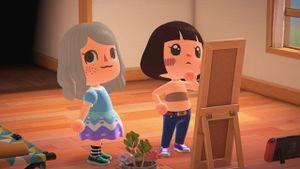 Screencap of a glitch allowing players to see the hidden bra texture.

One aspect of New Horizons that stands out from earlier games is the rebranding of player genders to "styles," making the game more accessible to nonbinary audiences. However, despite the name change, styles still have a hidden value assigned to them that corresponds to a gender binary. This affects the player character's model by adding a dark stripe across their chest, corresponding to a bra (albeit noticeably lower than where an actual bra would be worn), when the female style is selected. This element can't normally be seen in-game without the use of glitches, as removing a player character's shirt normally results in them wearing a plain white tank top regardless of style. 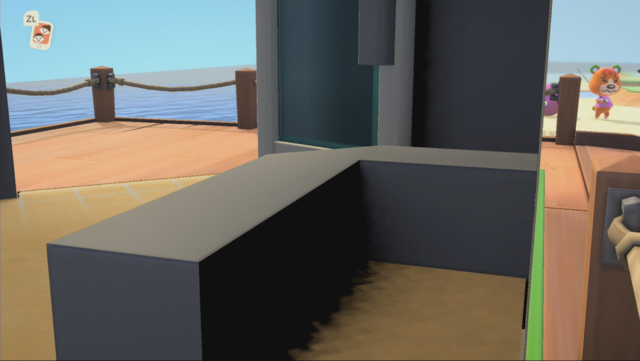 While in the island overworld, the model for the Dodo Airlines building contains an unseen low poly mesh for a desk on the inside. It is impossible to see this through normal gameplay.

Wilbur is always stored out of bounds in the Airport behind Orville. However, he cannot be interacted with, and can only be seen in the short cutscene when you go to someone else's island. Unusually, talking to the out-of-bounds Wilbur while on someone else's island brings up the above text. This dialogue is normally used as one of a few greetings lazy villagers will give to players who are visiting another player's island as a guest. Wilbur does not have any other dialogue for being talked to in this map in other scenarios, prompting an empty speech bubble in those cases.

This is a .bfsar Dummy sound file with an unknown use. 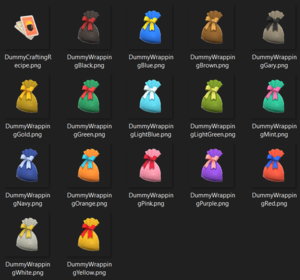 These are .Nin_NX_NVN model files containing only .dds texture files. They have an unknown use but they seem to be placeholders. Also, the gray dummy texture is misspelled as "gary", which is likely a typo or a mistranslation. 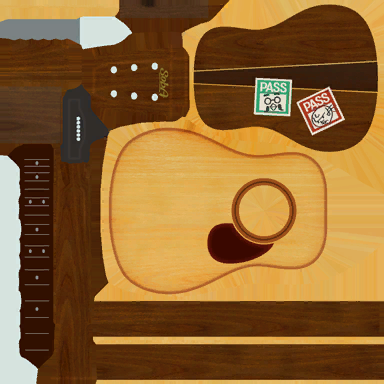 While not unused, it is impossible to see the stickers on the back of K.K.'s guitar without requesting a song to be played. The texture reveals that they are "passes" with drawings of Brewster and Dr. Shrunk on each. These are references to past locations where K.K. has performed: The Roost (run by Brewster) in City Folk & Wild World, and Club LOL (run by Dr. Shrunk) in New Leaf.

At the initial release of the game (1.0.0, to be precise), an icon of DJ K.K. was present in the game data. Although DJ K.K. was added in the game in the 2.0 update, it was updated to give him headphones, with the headphone-less icon being left unused.

This is an unused dummy animation file. This file seems to be a placeholder.

Throughout New Horizons, the player can obtain Reactions, which are small animations used to display certain emotions (like in previous games); however, some of these animations aren't actually being used. The majority of these unused reactions are exclusively used only by NPCs and villagers and sometimes the player in certain conversations between two villagers or in other situations, but some are just animations that have no use whatsoever. Oddly enough, the Shrunk Funk Shuffle from Animal Crossing: New Leaf is also here, despite Dr. Shrunk not being able to teach you exclusive reactions.