The NES Battle City is an enhanced port of the arcade game Tank Battalion.

After all of this, press Start on Controller 1 to activate a secret message from a programmer with a little animation. 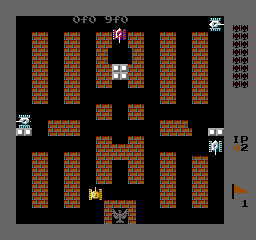 Game Genie code IIOKYXAZ enables an in-game memory watch function at the upper side of the screen. It allows you to watch the so-called Zero Memory area, showing the first 256 bytes of the RAM. Although there are two three-digit hex numbers, the left one is never used. B and Select increase and decrease the address, respectively.

Pressing A should increase the address by 0x10, but as a side effect of this Game Genie code it instead results in permanent stage completion. There were CHR fonts for the lowercase letters "a", "b", "c", and "d" after the numbers, but they were rewritten with some other data and only "e" and "f" remain. As a result, some numbers are displayed incorrectly.

This powerup is found among the others in the sprite data, although it appears in a pirated/modified version called Tank 1990. This should make you invulnerable to three enemy shots just like the heavy tank, but the helmet is used instead.

Present near the beginning of the ROM:

Present at the end of the PRG-ROM is some small ASCII art. The art has six kanji combined in two groups by three kanji: two small ones at the top, one large one at the bottom of each group. The two groups of kanji read "大久保" ("Ookubo") and "宇田川" ("Utakawa"; can also be read as "Utagawa", "Udakawa", or "Udagawa").

The first one is the last name of the game's programmer, Ookubo Ryouichi, while the second is a street name in Tokyo. At the time of the game's development, Tomcat System had its headquarters in Utakawa. Today, there exists an entertainment complex called the "NAMCO INTI SHIBUYA". It could also be Haruhisa Udagawa, who was a developer at Namco.