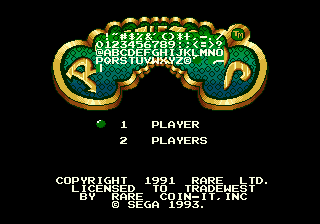 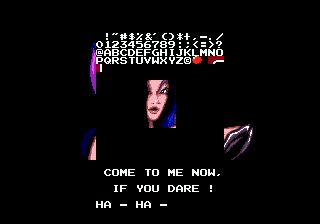 This code is not complete so it won't work properly and can cause glitches. It allows you to look through current VRAM and to change palettes.

Normally it should be called by instruction 00000376: JMP ROM:$00023E84, but it's skipped by previous instruction. The last one is performed once at the start of the game. However, if you skip it and jump to the buried code, you will get nothing. It's better to call it at the title screen or between levels. Calling it during a level causes the game to hang.

The most safe and useful way for seeing this test is using the Action Replay code 000C5E:0376. It changes the black-screen-replacing subroutine a bit. Every time the screen goes to black to be replaced by another screen, the CHR test will occur. Such occurrences are: starting the game from title screen and dialogues between levels, including the map screen.

Activate this code and press Start on the title screen. You will run into the CHR test. Press Left or Right to change palette. Press Up or Down to scroll the VRAM. Pressing C will reset the VRAM viewing address to 0.

Press B to continue to another screen. Note that for some reason you should wait a bit and only then the B button will work.