This game didn't get ported for a long time until it became part of Rare Replay for the Xbox One, nearly 25 years later.

Admiral Oink, a cut character that was the boss of Stage 2 but was replaced by Karnath (who was originally the boss of Stage 4, as seen by his boss arena). He has a complete set of animations in the game's data, including an idle stance, an attack animation where he pulls a bomb from his sack, and get-hit sprites. He would also be able to stuff the player in the sack, but this particular animation appears to be incomplete. A portrait of Oink still appears in the background of the game's penultimate stage.

The objective of the second stage was to rescue Santa Claus, who was kidnapped by Admiral Oink, and he can be seen here tied up and freed. The area where the boss fight would take place can be accessed through cheats, but it only consists of these sprites with a messed-up palette.

The Stage 2 enemy Scammy has graphics for a punching attack and a variation of his get-hit sprites where he sneezes.

Scammy also has a set with him carrying a gift box, which he promptly tears apart. This set also includes a sneezing animation.

Professor T. Bird, the 'Toads' gruff mentor is curiously absent from this particular game. However, he does have a sprite present in the game's data. As seen in pre-release screenshots, this was meant to be shown in stage intermission screens that got cut from the final game.

Angelica, the distressed damsel from the first game was going to appear in this game in the same role. Due to the big size of her sprite, it's possible that she would appear in either the attract mode or during a cutscene. Despite being absent, she appears in the artwork of the game's flyer.

Some drone-like enemy. It only has sprites of it opening/closing and getting hit.

Brain Damage, an enemy from the Game Boy game, was set to appear but was cut along with its stage. It has a large set of digitized sprites of it rolling around.

It's impossible for base form Big Blag to be knocked down in the actual game, only pushed back, but he has some sprites for it.

A single frame of General Vermin's punching animation is never used in the actual game.

A single sprite of the Gristle's ship wrecked which is also never used.

Rash's armbands are present on his sprites, but they are not visible due to how his color palette is patterned. As seen in pre-release screenshots, the armbands were originally visible but were for some reason changed to match the color of Rash's skin. However, switching his palette to either Pimple or Zitz's will result in his armbands being visible.

A sprite of what appears to be a map of the cut Brain Chase level, which would work much like the similar level from the Game Boy title. 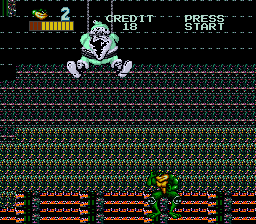 The battle section for the cut boss, Admiral Oink, is still in the game's data. Its graphics are corrupted, with invisible ladders and platforms that can be climbed on. Santa Claus' aforementioned unused sprites also make an appearance, albeit with an incorrect palette. The regular boss music is heard here. 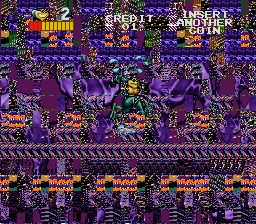 The cut stage where Brain Damage was meant to be fought. This stage also has bugged graphics. A splash effect is visible when a toad walks around the level, the ground was meant to be a flesh floor, as seen in a pre-release screenshot. The music used here is the one for stages 1 and 6.

An unused track that seems to remix bits and pieces from the Level 3, Level 4-2, and "Korpse Kount" tracks.

There are voice clips of some guy swearing, seemingly placeholders as he doesn't sound like any character in the actual game. No character swears in the final game.

A sample of Godzilla's roar is present.

Present at 0x7A0A72 in the main CPU is text for a crash handler.

Present at 0x7FE2EB in the main CPU is a build date.