This is a sub-page of Bloons Tower Defense 5 (Adobe Flash).

Older versions of the game contained graphics for an early UI, which were taken out of the game incrementally over the course of various unknown updates. These graphics still exist in Bloons TD 5 Deluxe, due to it being based on an older version of the game.

These early menu graphics use a vastly different and more generic style, and were likely laid out very differently than in the final. They're also filled to the brim with placeholder text.

An early logo, done in a style much closer to Bloons 2 than the final logo. 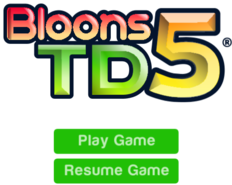 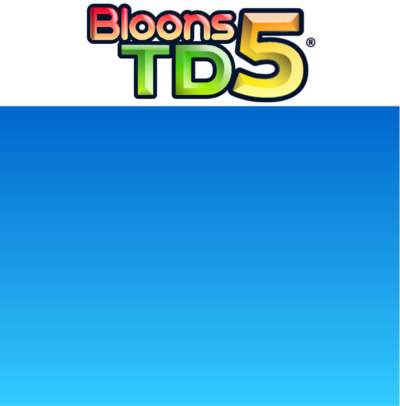 A blue rectangle with the early logo placed above it. Possibly intended to be a backdrop for other menus. While the rectangle fits neatly within the game's 800x600 resolution, the logo extends 213 pixels above that, so this graphic may have also been intended to move around in some way.

An early profile menu, with pink, yellow, and green profile icons. No equivalent of this menu exists in the final version of this game, though one was later created and used for BTD5 Deluxe. This menu likely predates the creation of Ninja Kiwi's account system, which probably made supporting multiple local saves redundant.

An early status bar. The final game doesn't have a status bar like this, as the audio settings and the player's name, rank, and Monkey Money are instead relegated to different sections of the main menu. This early status bar also has a "Main Menu" button, which doesn't exist in the final, though it was likely not needed due to how the final game's UI is arranged.

An early list of menus: "Track Select", "My Towers", "Power-Ups", "Challenges", "Premium", and "Medals". The final game doesn't have an equivalent to this. 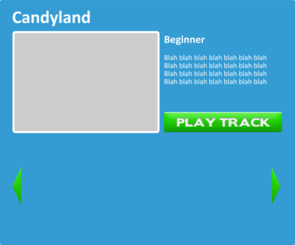 An early track selection menu. This menu seems to be less complete than the others, as the buttons to select tracks at the bottom are missing. The final version of this menu is arranged very differently, and doesn't have descriptions for tracks. This early menu uses "Candyland" as a placeholder track name; ironically, a track with this name was added in the December 14, 2015 update, which released on the game's third anniversary. 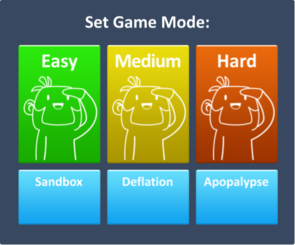 An early game mode menu, featuring easy, normal, and hard mode buttons with simple monkey doodles. In the final game, the sandbox button is on the right, rather than on the left. 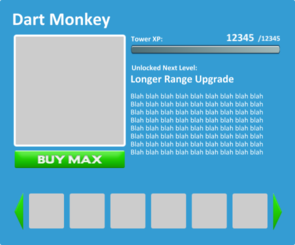 An early tower details menu. The final version of this menu shows the selected tower's entire upgrade tree, while this version only shows the next upgrade that the tower will unlock. 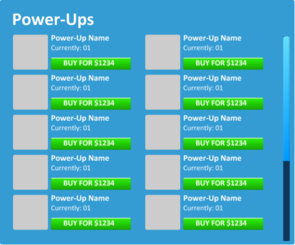 A shop for buying "power-ups". These were likely precursors to the Special Agents seen in the final game; a relic of this is that Special Agents are referred to by the rather generic name of "consumables" internally. This early concept was seemingly revived for the sequel, which replaced Special Agents with "Powers". 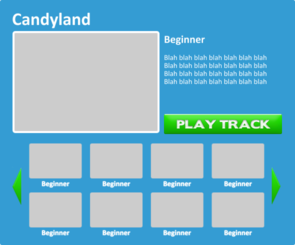 Likely an early menu for Special Missions, though this menu appears to just be a more complete version of the aforementioned track selection menu. 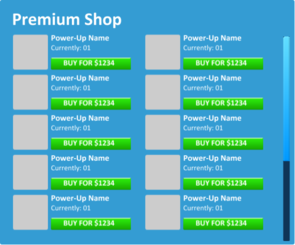 An early premium item store. Other than the title text, it's identical to the "power-ups" shop. 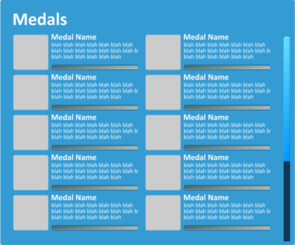 Seemingly an early achievements menu. No equivalent of this menu exists in the final version of this game, though one was later created and used for BTD5 Deluxe. This menu also likely predates the account system, which has its own achievements system that the final game opts to use instead. 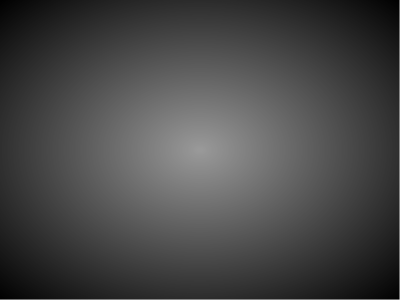 It's a vignette. It's not clear where or how this would have been used. Not much else to say here...

The Boomerang Thrower has unique art for its Turbo Charge upgrade. Despite existing in the files since launch, these graphics have gone completely unused, as, for unknown reasons, this upgrade instead uses the same graphics as the Bionic Boomer. These were later restored in BTD5 Deluxe, however.

These graphics also exist in Bloons TD Battles and Bloons Monkey City, where they also go unused in the exact same manner.

The Pontoon and Pontoon Pro have an unused splashing animation named Build, which would've played upon placing the tower.

The Aircraft Carrier has an unused animation of its planes being launched. This was used in earlier versions of the game, and is still used in Bloons TD Battles and Bloons Monkey City, but was oddly disabled in the July 22, 2015 update. Seeing as this update also altered the art for the Destroyer and Aircraft Carrier slightly (making the monkey larger), it's likely the animation was disabled, either accidentally or on purpose, in the process of this change.

In the July 22, 2015 update, a very large amount of unused art was added to the game's files, probably by mistake. Most of it was subsequently removed in an unknown update. Some of these assets seem to be from early in development, while many others are taken directly from BTD5 Deluxe.

The Bloonchipper from BTD5 Deluxe.

The Monkey Engineer and Sentry, also from BTD5 Deluxe.

The Special Agents from BTD5 Deluxe.

An odd-looking pile of Dart Monkeys. It has two animations: Build and ThrowLoop.

A creepy-crawly spider tower. A scrapped Special Agent, perhaps? Its graphics appear to be unfinished, as they lack shading. It has a single generic attack animation.

Funnily, the art for this tower didn't go to waste, as it was later repurposed for Bloons Monkey City—a slightly altered version with red stripes and no eyes appears on the title screen during halloween. Since Bloons Monkey City was released in 2013, it's safe to say this tower has existed since 2013 or earlier.

This tower is... strange. It has two animations: Loop and Exit.

Likely meant to be the aforementioned Spider tower's method of attack.

An early trail effect for the Super Monkey Storm. The final version is not animated and opts for a simple gradient instead.

A grenade. Probably meant to be an explosive projectile, but it's not clear where this was meant to be used.

In very early versions of the game, an unused folder named backgrounds existed in the files, which contained alternate renditions of some of the game's tracks. Unlike the final game's maps, which use Adobe Flash sprites for more flexibility, these renditions are simple raster images, which is similar to the method used to render maps in the previous game.

This folder, and all the images inside it, were removed in later versions.

The image of Archipelago is by far the most interesting, as it actually seems to be a work-in-progress version of the track. This version of the track is missing several details, including the treasure chest, the shipwreck, and various environmental details (rocks, water ripples, etc). Additionally, the path in this version seems to be a water current, unlike the path in the final version, which is a dotted line reminiscent of those found on treasure maps.

In the January 27, 2012 update, several achievements were added to go along with the addition of daily challenges, including an achievement named "Otherworldly", which was worth 1200 AP and required completing 365 daily challenges consecutively. Due to the cruel and unusual requirements for this achievement, it was, by popular demand, outright removed in the May 17, 2012 update (long before it became possible to obtain it), leaving its icon unused.