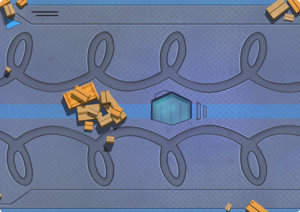 This track was allegedly cut from the final game because one of the founders of Ninja Kiwi, Stephen Harris, does not like space maps. It was going to be Intermediate difficulty. The model for the track was removed in version 24.0, while the textures and thumbnail for the track only existed in early builds. 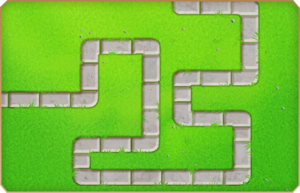 As the name suggests, this is a recreation of the track from the very first Bloons Tower Defense game. This was most likely used for testing. The thumbnail for the track only exists in builds from early 2018, though the thumbnail itself seems to be a remnant from an even earlier build. In the early 2018 builds, the map model included several decorative objects for testing purposes, such as houses, flowers, and a windmill, the models of which were later used for other maps such as Monkey Meadow and Town Center.

There are two additional test tracks, TestMap and TestWaterMap, both of which have the same path layout as BTD1. TestWaterMap has a mask (defined area for tower placement, such as the path or the ground) entirely of water, while TestMap has no mask at all. 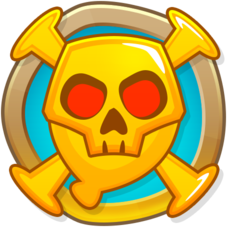 An icon for the Extreme track category, which was previously seen in BTD5. Interestingly, while this icon is not used anywhere in-game, the official Ninja Kiwi Discord server used to use this icon as an emote.

Buff icons for the Elite Defender's passive abilities. These have existed since version 12.0, but have never been used.

Fortified variants used to exist for every Bloon type in the game, but only Lead, Ceramic, Golden, and MOAB-class Bloons can be fortified in the current version of the game. Fortified Purple Bloons could appear in freeplay mode at launch, but this was removed in version 2.0. These Bloons were made non-functional in an unknown version, and their graphics were removed in version 24.0. 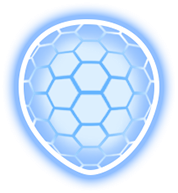 This overlay texture was added to the game's files in version 24.0, but was never used. It may have been intended as an ability of the Golden Bloon, possibly as a nod to Bloons Super Monkey 2 where it was always protected by a shield.

A very similar graphic would later be used for the Shielded Bloons in Bloons Pop!.

Early textures for Captain Churchill. These textures are less polished than the final textures, and they bear a striking resemblance to his appearance in an early render. These textures don't fit Churchill's model or UVs in the final game, which indicates that Churchill also had a different model at one point.

This weird-looking texture for a rocket projectile has three duplicates. Most likely a placeholder texture, given its ubiquity. Removed in version 24.0.

The same graphic as the above, but grayscale and with the bottom half cut off for some reason. Also removed in version 24.0.

A number of early, strange-looking textures for the Monkey Ace's projectiles.

A blue shuriken. It seems that the Ninja Monkey would have used this when upgraded to Seeking Shurikens, rather than using the regular shuriken textures, as it does in the final. Similarly, a second texture was supposed to be used for having both Seeking Shurikens and Sharper Shurikens at the same time, but is also unused and, oddly, is completely identical to the blue shuriken. Both were removed in version 24.0.