Bloons Adventure Time TD is the result of combining the rubbery menace that is the Bloons, and the weird fantastical world that is the Land of Ooo, in one tower defense game.

There are an assortment of icons that may have been planned to be used for character statistics. It is also worthy to note that they are called powers in the files, so it is also likely that they were planned to be used as temporary stat-boost powerups. But in the final game, there are significantly more powers that are also more complicated.

An image which appears to be analogous to a character with all three Wizard Powers equipped.

The Ghost DDT, alongside the Ghost Purple Bloon and the Ghost BAD, does not exist in the final game, likely to prevent the first encounter to Ghost Bloons in certain levels from being too hard. However, there appear to be textures for the Ghost DDT.

Textures for unused Ghost variant of BAD, in various health stages. Compared to the regular BAD, it has larger rips to show a skeletal structure inside and is wrapped in bigger bandages around its turbines as it takes damage, similar to other Ghost MOAB-class Bloons. 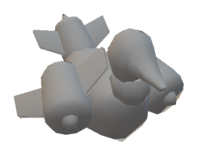 Prior to v1.0.4, a BAD bloon could be inflicted the Polymorph status, a variant of stun exclusive so far to Bloons Adventure Time TD. And because no MOAB-class Bloon shared the same polymorph model, the BAD had its own bird-shaped polymorph. It can no longer be viewed in an actual game, but it still exists in the game's files as of v1.7.5.