In this game based on the popular kids show, the residents of a house of talking objects, strange-colored canines, and a live-action manchild decide to have fun with words for no explained reason. The game features multiple minigames designed to teach small children basic English. You can also collect words by playing these games, which can be used in the "Word Book" to make your own stories, a la Mad Libs.

Just like with every other Humongous game ever made, this game has complete but inaccessible subtitles. They can be turned on by using ScummVM's UI or by adding the line 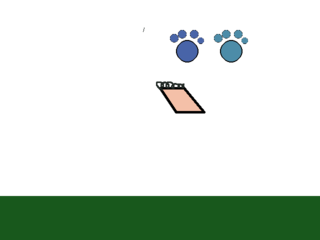 Using ScummVM's debugger (Ctrl+D) and entering the command room 3 brings up this interface. It's presumably placeholder graphics for the notebook, which doesn't appear in this game, and pawprints, which are used, but only as an icon on the launcher.

A few graphics from Big Thinkers! First Grade are leftover in the graphics, suggesting this game was modified from that one.

The star cursors from both Big Thinkers! games. This game only uses the default cursor and the arrow ones.

The yes/no graphics from Big Thinkers! First Grade. Interestingly, the frog graphic seems to be an earlier version of the actual graphic from First Grade: it has no shading and is missing the spots from the final. 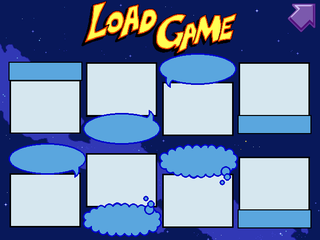 Bizarrely, the load game screen for Pajama Sam can be seen by typing room 17 into ScummVM's debugger. It was very likely just a leftover from the aforementioned game. Considering the same graphics are left in Big Thinkers! Kindergarten, this further suggests that ABC Time was modified from the Big Thinkers! games, with the developers overlooking this screen yet again.

In addition to the unused letter graphics (see above), Felicia Felt has sound files of her saying the letters despite them going unused.

There's even sound files of her sounding them out!

Lots of sounds leftover from Big Thinkers! are still in the files. 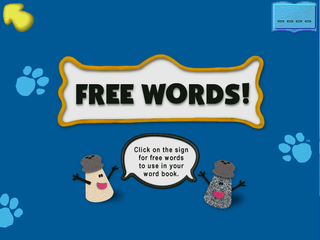 As the screen implies, words for the Word Book can be unlocked by clicking the sign. This screen can be accessed by warping to room 15 using ScummVM. This was likely used for testing.