Freddi Fish 4: The Case of the Hogfish Rustlers of Briny Gulch

Freddi Fish 4: The Case of the Hogfish Rustlers of Briny Gulch is the fourth game in the Freddi Fish series. This time, Freddi and Luther take a trip to Freddi's Cousin Calico's ranch, where she raises pigs hogfish. Unfortunately, it turns out they've been stolen by some know-nothing thieves who can't raise hogfish to save their lives. As expected from the typical Humongous fare, there is plenty of unused content to be found.

In the tradition of Humongous Entertainment, Freddi Fish 4 includes subtitles, but there is no way to turn them on in-game. Adding the line

to hegames.ini will display the subtitles. The subtitles can also be turned on through ScummVM's interface. 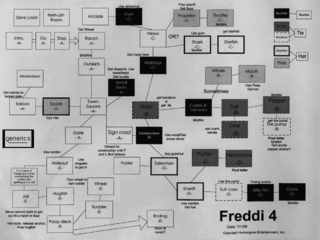 Pressing the G key takes you to the room debug, where you may jump to any room at any time. This one is very detailed in relation to other room debug screens in Humongous games, as it also shows where items are picked up and other tidbits. 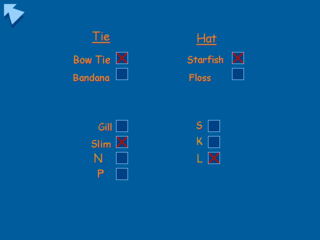 Pressing the C key takes you to the path debug screen, where you may change the current path. 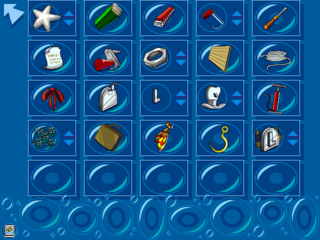 Pressing the I key takes you to the item debug screen.

The combination Ctrl-F enables a turbo mode that makes all animations run much faster.

Ctrl-O prompts the user for an object number to pick up.

Ctrl-G brings up a prompt for a room number to go to.

Pressing Ctrl-E first asks for a variable number to change, then gives the value of that variable and prompts the user for a new value to set it to.

A different version of the theme used for when Nelson puts the belt buckle together, without the melody.

Using the rope on the shark

Some dialogue for attempting to use the rope on the shark exists, but since it is impossible to obtain the rope in the starfish route without debug mode enabled, this dialogue goes unused:

The following INI settings change things based on what value they are set to (replace "X" with a number):

prevents the hogfish from bobbing up and down in the hideout. This was probably enabled when your video card was considered too slow to be able to handle certain loads, much like with other Humongous games.

makes it so that only one "interlude" cut scene plays in the game (where X is any value from 1-5).