Freddi Fish and Luther's Maze Madness is one of the two arcade styled Freddi Fish games. Luther stops by Grandma Grouper's house for some worm doodles, but in the process releases all the kelp seeds after all the trouble they went through to get them last time. Except this time, they have to go pick them all up one by one in many maze caverns.

Many Humongous games include subtitles inaccessible normally, and this one is not excluded from that bunch. You can turn them on by either entering

Just like with the other first four Junior Arcades (the other Freddi Fish one and the two Putt-Putt ones), this game has an in-house level editor the developers used to design the levels buried in the game code. Sadly, this one is the lowest functioning of all of them as testing the levels does not seem to work. It can be accessed by either entering

(a reference to programmer Rhett Mathis) into hegames.ini or scummvm.ini and pressing "e" during gameplay, or by typing "room 5" in ScummVM's debugger. This INI setting also has the additional (and less-documented) functionality of changing the "Quit" button on the main menu to play the ending cut scene instead of quitting the game like normal. 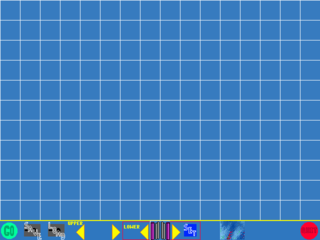 The editor is easy to use once you get the hang of it; use LOWER to switch between background elements (such as walls) and use UPPER to switch between foreground elements (such as seeds and decorations). SET changes the object theme. Click the square picture to change the background and the music. Click on the grid to place your object and right click to remove it. Click STOP when you are done. SAVE and LOAD prompt you a file name to save or load from, but it does not work in the game's finished state.

Clicking GO is supposed to test the level, but depending on how you're playing the game, it will fail for a specific reason:

The only known way to test a level is something of a nightmare - you actually have to modify the game's Level 1 in the MAZE.he8 file (so create a backup copy of that file before doing this). Since the editor can only save one cave at a time, you have to save each room individually with the editor and then put them all together using a hex editor to avoid errors. See more details here. Note that when run with ScummVM, the editor saves caves in a compressed format that the game will not read, so if you must run the game with ScummVM, the only way to save a level is to actually encode it, that is, manually enter in cave data using a hex editor.

Remember the Pong-like game in Putt-Putt Travels Through Time called Squoosh? This game has an early build of it buried in the data. To access it, type "room 6" in ScummVM's debugger. It is mostly the same as the one in Putt-Putt, but the ball seems to move a lot faster due to higher terminal velocity. It contains four pictures, the first being the Seattle SuperSonics' '95-'01 logo (only naturally, as Humongous was headquartered near Seattle), the second having Luther being attacked by the junkyard dogfish in the first Freddi Fish game, the third featuring a picture of the UpChuck Easter Egg from Putt-Putt Saves the Zoo where Pep is licking up Putt-Putt's vomit, and the fourth of the Humongous development team themselves (also buried in the files of Let's Explore the Jungle). A small element that doesn't make it to Putt-Putt Travels Through Time is that, when the last box is revealed, a hole is created where the ball hits.

By entering a name as FILET or TARTAR, all levels are accessible from the very beginning.

Two major versions of this game exist, one from 1996 and one from 1999. The differences are very, very minimal, but they exist.

The copyright dates were updated accordingly.