Freddi Fish 3: The Case of the Stolen Conch Shell

Freddi Fish 3: The Case of the Stolen Conch Shell is the third (obviously) Freddi Fish title. This time, Freddi and Luther have been invited to the Founder's Day festival by Luther's Uncle Blenny. Upon arrival, they discover the great Conch Shell (a horn-type thing) has been stolen, and Blenny has been wrongfully imprisoned for theft as he is the Conch's keeper. It's up to Freddi and Luther to find three golden pipes to make a lazy dogfish find the Conch and make sure everyone is able to celebrate the creation of their one-sided society.

Also like most Humongous games, this one has a substantial amount of debug console output. The easiest way to view it is to run the game in ScummVM and set the debug level to 0 or higher.

Like most Humongous Entertainment games, Freddi Fish 3 includes subtitles, but there is no way to turn them on in-game. Adding the line TextOn=1 to the hegames.ini configuration file will display the subtitles. The subtitles can also be turned on through ScummVM's interface.

Like many Humongous Entertainment games, this game features a debug mode. Adding the line SputmDebug=40468 to the configuration file will enable the following debug rooms: 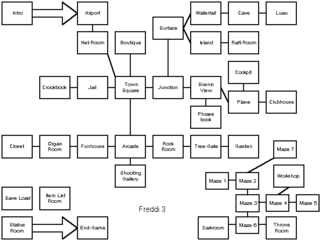 Press G during gameplay to bring up the room debug (room 42 in ScummVM). Click on any room to warp to it. 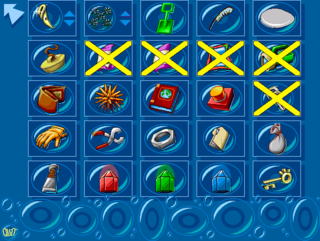 Press I during gameplay to bring up the item debug (room 43 in ScummVM). Clicking on any item crosses it out and places it in Freddi's inventory. 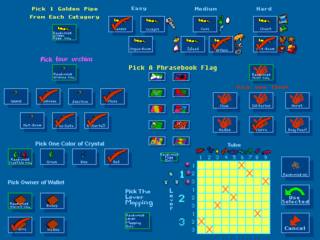 Press C (note if C doesn't work try pressing P) during gameplay to bring up the path debug (room 44 in ScummVM). Here, you can set the locations of the golden pipes and change many other variables. This menu is quite large compared to the debug rooms from other Humongous Entertainment games.

If you came here expecting the typical kinds of storyboard graphics found across most Humongous games, you're going to be very disappointed.

Only one purple sea urchin can be taken out of the inventory at a time, so all of these two to five urchin variants are unused.

The folder containing the suspects is not a usable item in the game – it's simply used to remind the player what the task at hand is.

While the foreign language book is used as a cursor, it's not one in the true sense; it's just an in-game graphic that follows the cursor, leading to these going unused.

When the flashlight is used in the proper area, it skips the cursor and goes straight to lighting up the cave. Since it has no known use on any of the characters, these cursors are not used.

While the thief's bag does show up in the game, it is not an item that can be picked up and it only shows up in the ending -- the only interaction after Freddi and Luther find it before the credits roll is deciding who the thief is with the item inside the bag as evidence. The item debug screen allows you to actually pick up the bag and place it in the inventory. There are also equivalent cursors and an "examine" dialogue piece along with it:

The item cannot be used on anything in the actual game, so even if it is placed in the inventory, the cursors go completely unused.

Only four urchins will be in the game at once, but the graphic for five is in the data anyway. The only way to pick up more than four is to first add at least one urchin to the inventory with the item debug screen and then pick up another in-game. No dialogue exists for examining five or more though (attempting to examine it if you have more than five does nothing), and no graphics exist beyond five.