Freddi Fish and the Case of the Missing Kelp Seeds

From The Cutting Room Floor
Jump to navigation Jump to search
This page contains changes which are not marked for translation.
Other languages:
Deutsch • ‎English • ‎português do Brasil • ‎svenska • ‎한국어

Freddi Fish and the Case of the Missing Kelp Seeds is Humongous' first Freddi Fish title, notable for being their first game made specifically for Windows. The game puts you in the "shoes" of Freddi Fish and her annoying little green sidekick Luther as they look for Grandma Grouper's missing kelp treasure, which is apparently the only source of food in the entire ocean. Can you find the location of the kelp treasure before the mafia does?

Like other Humongous Entertainment games, Freddi Fish has subtitles for all dialogue. In the first print run in 1994 (the one with the Windows 3.1-styled pause menu), these were used and could be activated by pausing the game and checking the "Display text" box. However, on every release after, they need entering TextOn=1 to the game's entry in the hegames.ini file, or through ScummVM.

In Mr. Starfish's room, there is an unused clickpoint involving a hanging skeleton of a fish. While the graphic exists in the room, the game covers it up, leaving an out-of-place cutout on the rocks. It also has three animations, one of which involves interaction with the jack-in-the-box head above it. The clickpoint can be run with ScummVM's debugger by force running scr 227 in the 1994 version and scr 229 in the 1998 version.

Interestingly, the skeleton is present on the load/save graphics for this room, and it still showed up on a few pre-release screenshots, making it likely that this was a last-minute change.

On the deck of the sunken ship (room 48 in the 1994 version and room 49 in the 1998 version), there is a sword that normally only plays an animation of a turtle sliding down it when it is clicked on; however, there are two more animations stored in the game's data for it though of the handle coming to life. These can be enabled by entering EnableFishBradSword=1 in hegames.ini. If you want to allow these animations to play more than once, you can also add PeteIsAlsoTheOverlord=1. There is no known reason why these were cut.

Additionally, the save/load music is played through the sound effects channel, but a duplicate version also exists on the music channel for some odd reason. All of these unused tracks were released on Bandcamp; the soundtracks for this game and others in the series was released on October 9, 2020 and split across two volumes.

A disturbing insight into Freddi's mind can be viewed by adding EddieEatsLuther=1 to hegames.ini or scummvm.ini and clicking on Luther when with Eddie (see video at right for the result). This scene was animated by Tom Verre, supposedly as a way to blow off steam, though it's interesting that time was taken to record lines for Luther and Freddi just for this cutscene. They were even translated across international releases.

This scene can be viewed multiple times in one playthrough by also having BretIsTheOverlord=1 (named after Bret Barrett) in the configuration file.

The 2001 Norwegian dub of the game colorized the item cursors and made movement animations skippable, which would not happen anywhere else until nearly six years later (see below for details).

The game has three known major versions: the initial version made in 1994, a re-issue made in 1998, and a 2007 re-release that changed the subtitle to Kelp Seed Mystery.

The 1994 version used the generic "Humongous Entertainment Presents..." logo without any sound. The 1998 re-issue used their newer logo with the signature drum roll crash. The 2007 version reverted to the 1994-style with an orange logo sans sound. 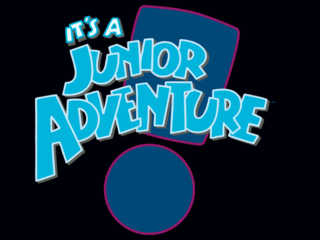 The Junior Adventure logo was added to the 1998 version, using the light-blue variant that was typically used in the other Freddi Fish games. The 2007 version excludes this.

The copyright dates were updated accordingly. The 2007 version had its title screen adjusted to use the shortened title.

Starting from this game onward, cursors are included that are made to indicate the option to go somewhere off in the distance. In the 1994 version, these particular cursors are very long and thin as opposed to the short and thick ones every Humongous game made afterward would adopt. The 1998 version changes this.

Additionally, all the item cursors were colorized in the 2007 version.

The 1994 version used a more generic font for the credits, sort of similar to the subtitle font used in the DOS games. From the second game onward, a more stylized cartoonish font was adopted for each credit sequence, and was retroactively added back in for the credits of the 1998 version.