The universe abhors a frog.

It's impossible to hear the main theme (Taken from the 1977 anime Araiguma Rascal) in full in normal play; The most the player ever gets to hear is about 32 seconds into the track, leaving the last 8 seconds of the track out.

Even then, there's a mistake in the track that accidentally mutes the second voice channel about 25 seconds in. Put the following code in MAME's frogger.xml cheat file (Or in any of the derivative sets) to fix that channel.

An unused "100" bonus graphic. It's possible that either gobbling the fly or taking one of the pink frogs home originally gave 100 points, but in the final game, both give 200 points.

The older Sega set is almost identical code-wise to the Konami set. The only two changes are the copyright string and correcting "FIYE HOMES" to "FIVE HOMES" in the point table. 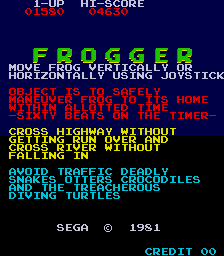 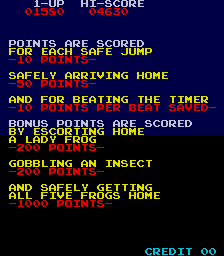 The newer Sega set replaces the old screen with a detailed description of the game, and adds an additional screen with a more thorough point table.