A licensed port of Frogger on not-so-licensed Famiclone hardware. It is not backwards-compatible with an original NES/Famicom; however, it was exclusively released on plug & plays and proprietary handheld devices. 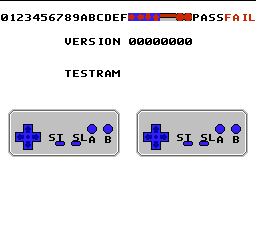 Accessed by holding A + B as the game enters the main Frogger title screen. The screen pictured appears glitched at the top, likely due to it being hacked up and re-released so many times...

This version of Frogger has been republished several times, with some revisions having differences from each other. Here are the known alternate versions of the game: