Galaxian 3 (sometimes rendered as Galaxian^3) is a PlayStation port of the extremely huge 6 player arcade game of the same name, which utilized LaserDisc video in conjunction with polygon graphics and was based off an even bigger 28/16 player (depending on where you played it) attraction in Japan. Wow. Too bad the port only allows four players and has a cut down frame rate (even worse in Europe where it somehow managed to get a release).

On the main menu screen (where you select a mission), press R1, L2, L1, R2, Triangle, Square, L2, Select. You will hear an explosion sound. After that, either press X in the Japanese version or Circle in the European version and the debug menu will appear. Press Up and Down to highlight each option and Left and Right to change an option. 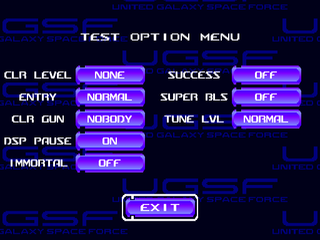