The sequel to Galaga, Gaplus is also known as Galaga 3 thanks to a licensed modification kit distributed by Namco because they thought name recognition, not the video game crash of '83, was the reason it wasn't doing well in arcades.

Within the font is this unused graphic for the Japanese version's blood-type high score header. The game uses the individual letters instead. 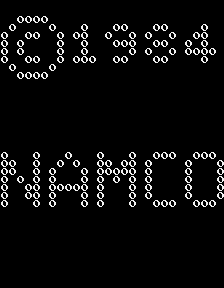 After entering the service mode via dipswitch settings, hold Player 1 Start and Player 1 Fire and change the sound test to 19. 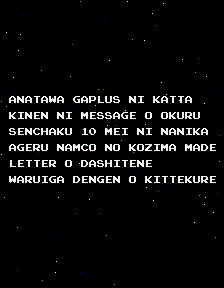 Makes a hidden message appear on-screen that will not disappear until the game is power-cycled.

You have beaten Gaplus. In commemoration, we send you this message. Send a letter to Kojima at Namco, and he'll give something to the first 10 respondents. Sorry, but turn off the power now.

Starts each subsequent game with eight ships until the machine is turned off. It should be noted that the maximum amount of starting lives via dipswitch settings is 5.

Gaplus didn't do as well as Namco had hoped financially. In an attempt to boost interest, Namco licensed out official modification kits to transform the name of the game to Galaga 3. There actually was no "Galaga 2" at the time; this name seems to imply Namco was attempting to pass off Galaxian as Galaga's sequel, despite the opposite actually being true.

The only thing this kit changes is the title screen, replacing the Gaplus logo with a shoddy Galaga 3 one.