Godzilla 2: War of the Monsters

Godzilla 2 was quite the change from the first game, opting for strategy instead of action. It also started out as a Rodan game and is one of the few US NES games (along with X-Men) of which the developers are not currently known.

Despite the game never being released there, some Japanese text remains in the game. The first two sections of text were for the opening cutscene, stored with their respective graphics, just like their English counterparts. The third bit of text is a generic font that is repeated twice and the rest are for the in-game events. 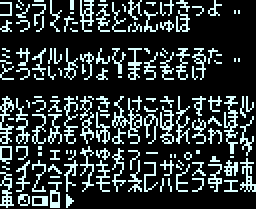