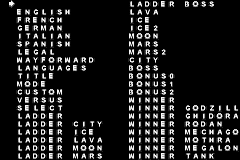 GameShark code 0300102402 will boot into the debug menu where you can select any level and screen in the game.

The later Japanese version has various differences. Most notably aesthetic updates to Godzilla, Mechagodzilla, and Mothra, mostly edited to tie in with then-recent films in the franchise. In addition to a completely different title logo, its background reflects the updated Mechagodzilla and Mothra.

Godzilla's skin tone was changed from green to a more typical gray, and his sprite was changed to add the scar he received in Godzilla Against Mechagodzilla.

Mechagodzilla's design was updated to use the "Kiryu" design from Tokyo S.O.S.

Mothra is brown instead of light blue and her mouth was redrawn to be more on-model.