Guilty Gear Xrd -SIGN- is the PC and console port of the arcade game of the same name, which dug the old fighting game series out of a decade-long hiatus. 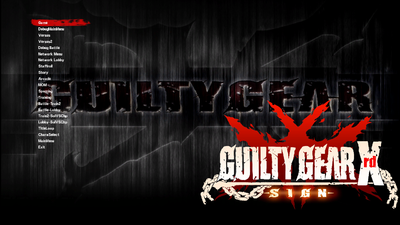 There exists a hidden debug menu in the game with various options to test the game's features, this same menu appears again in Xrd Revelator with some new features.

Strangely, selecting any character through conventional means after having started the game through the Debug Menu will lead to only colors 1-6 being selectable.

Game: Starts the game as it would normally.

DebugMainMenu: Leads to a blackscreen.

Versus: Leads to the character select against a CPU.

Versus2: Leads to a blackscreen.

Debug Battle: allows you to select any character for both players, select their color scheme, their voice-over, and the stage that will be used. 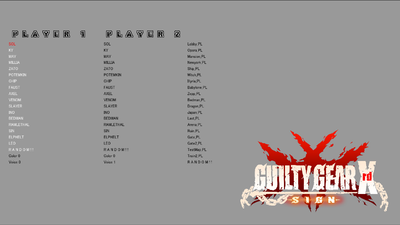 Network Lobby: Leads to where you would search for a lobby on the Network Menu.

Staffroll: Starts the credits sequence from the end of Arcade mode.

Arcade: Leads to the character select for Arcade mode.

MOM: Leads to the main menu of MOM mode.

Sparring:Leads to a single player character select, playing in this mode is impossible due to the time limit already being set to zero, making the match end instantly.

Training: Leads to the character select for Training mode.

Battle-Train2: Starts a multiplayer match with both players being Sol Badguy on the stage Train2_PL which seems to be an unused stage incorrectly named -5th Skywalk -rain--, it takes place in the same train as Edinburgh MagicaPolis although with a different backdrop.

Battle-Lobby: The same as Battle-Train2 except on the stage Royal Court.

Train2-SolVSChp: Starts a multiplayer match with Player 1 being Chipp Zanuff and Player 2 being Sol Badguy also on the stage Train2_PL.

Lobby-SolVSChp: Same as Train2-SolVSChp except it's also on the stage Royal Court.

TitleLoop: Starts the game normally. (apparently the same as Game)

CharaSelect: Leads to the character select with both players.

MainMenu: Sends you to the main menu. 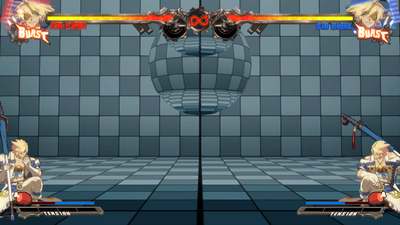 Using the Debug Battle option on the Debug Menu you can start a battle in a hidden test map called TestMap_PL, the map consists of a simple checkerboard texture for the walls and floor, it also contains a "reflective" sphere in the middle.