JoJo's Bizarre Adventure: Eyes of Heaven is a tag team 3D fighting game based on the JoJo's Bizarre Adventure series that features characters from parts 1-8 of said series. The main story follows the protagonists of each part as they team up to fight past foes and try to thwart the plans of the almighty "Noble One", a DIO from an alternate universe who managed to achieve heaven.

The game may have had been an sequel to All Star Battle, as evidenced in the game's data and main folder for sounds and music being labeled as "ASB2" and "All-Star Battle Project". 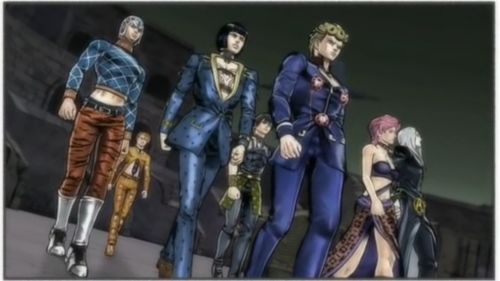 The character Leone Abbacchio from Vento Aureo was originally planned to be a playable character. He reached the testing phase, but the ability of his Stand "Moody Blues" proved difficult to make viable in a fight. His model can still be found in the game's files, and can even be seen in an image featured in the main story's credits.

Jotaro Kujo's appearance from Stone Ocean was likely planned to appear as a customized alt costume for Part 3 Jotaro. Voice lines for interactions between Part 6 Jotaro and the other characters, as well as some other battle-related dialogue and an unused graphic of his shocked expression cutin can be found in the game's files. Although a model of Part 6 Jotaro does appear in an render in the main story's credits, his model is not present in the files. His interraction parameters can also be found in the files.

Certain characters were planned for the Part 8 stage such as Yotsuyu Yagiyama as well as Norisuke Higashikata's Stand King Nothing. CyberConnect2 had plans to have a cast of 120+ playable characters, though several technical concerns forced them to limit the amount to only slightly more than All Star Battle.

According to stage gimmick files, the JoJolion "Higashikata Residence" stage contains an object of a stage hazard named "kuri", which translates to chestnut. It is likely that this corresponded to Yotsuyu’s scrapped stage gimmick (see Unused Graphics and Animations).

Sound files relating to this can still be found in the game's files.

The first EOH demo originally featured a minimap feature on-screen. While it is still used in story mode when exploring the hub areas, it is unavailable in battle.

In the trailer announcing him, Diavolo had a much different theme than in the final game, being more "midi" based rather than the primarily electric guitar-based tune of his theme in the final game.

In the demos, there are early versions of map and menu themes. Given the intense composition of the map themes, it's most likely that maps were going to have their own battle themes, rather than use the leading player's theme in the final game.

Unused animations exist in the files, one being DIO’s “Road Roller!” Heat Attack. Additionally, DIO has an unused animation for when he heralds the flow of time resuming. 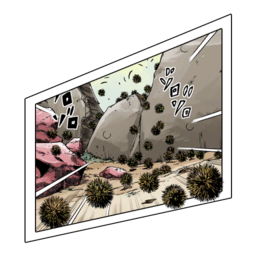 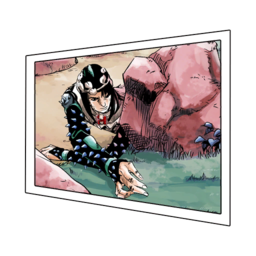 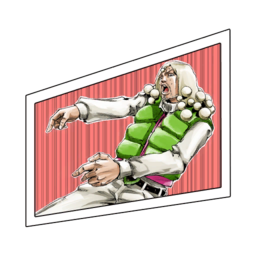 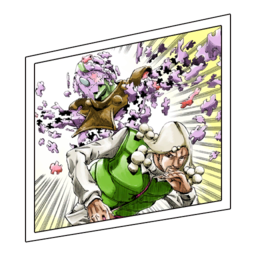 Unused models for the Inspector from Phantom Blood, as well as Yotsuyu Yagiyama and Norisuke Higashikata's Stand "King Nothing" from JoJolion are present in the files.

The steamroller model from DIO's Great Heat Attack from the previous JoJo fighting game All Star Battle is present in the files.

While not technically unused, Young Jolyne's model from the after credit scene does in-fact has a face. It normally can't be seen too well in-game as it's usually obscured by the camera angle.

While not present in the files, the Capcom Heritage costumes for Jotaro and Polnareff last seen in All Star Battle are still in the game's files, though it's unclear as to if they were going to be unlockable or were simply leftovers.

While not present in the game's files, ID names and orders hint that Pannacotta Fugo's outfit from Purple Haze Feedback was also planned for inclusion. 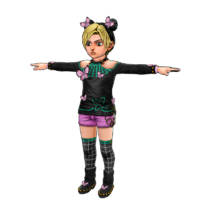 Certain character have voice lines for Stand Clashes, which were present in All Star Battle. This feature was excised from EOH, due to its gameplay style not making it practical.

All characters have "GoGoGo Finisher" voice lines, but are left unused as the feature was removed from the game.

There are some unique voice lines for characters reacting to their partners getting retired in battle that aren't heard in-game.

Generic battle intros and interactions that are unused can be found.

Unused dialogue-captions files are found in the game's files for a supposed “Part 6 Jotaro”/ This was likely meant to be a part 3 or 4 Jotaro alt, similar to Wes Bluemarine as an alt costume for Weather Report.

Due to the fact that nearly every character and Stand in the game is named after some sort of musical reference, many of the names in the game were altered for the localized releases for copyright reasons.

The character Rudol von Stroheim had his default costume removed and replaced with his alternate cyborg outfit in western releases. This is likely because his original default costume was a Nazi uniform.

There were some slight errors made in the localized releases of the game: