These two face graphics are stored after all of the other character portraits, but are not referenced at all by the game's event data. The left side has "代理" (substitute) written above a portrait that looks similar to Doraemon, while the right side has Hebe/Bop-Louie from the Hebereke series.

A message from the developers is located at offset 0x00FF00: 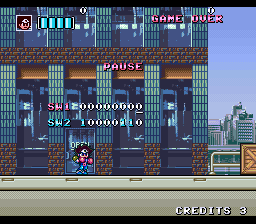 The game contains a flag editor similar to the "soft dip" settings seen in many arcade games. To enable it, pause the game and (on either controller) press Up, Up, Down, Down, Left, Right, Left, Right, X, X, B, B, Y, A, Y, A.

The flags are divided into two groups (one byte each). Use the D-Pad to navigate, press Y to set or clear the selected flag, and press Start to exit. 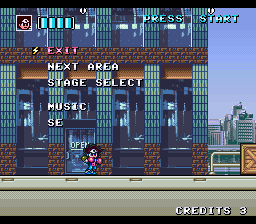 Pause the game, hold B + X, and press R to open the sound test menu. Just like before, use the D-Pad to navigate and press Y to make your selection.

Setting bit 7 of SW1 adds the "next area" and "stage select" options to the menu.