King's Quest II is a PC graphic adventure game in which King Graham sets out to find the three golden keys to rescue Valanice.

Press ALT+D (Command-D in the Mac version) or type FAST TALK to enable some debugging functions. These features are disabled upon entering a new room.

When debug mode is active, the text for handling unknown words is simplified. 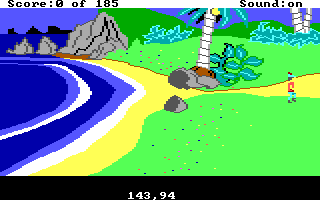 Type TESTER to display Graham's X and Y coordinates on the bottom of the screen. 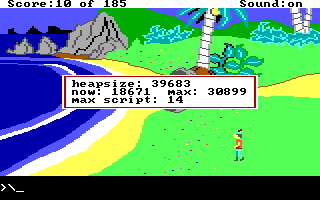 Press F10 to display info on memory use. 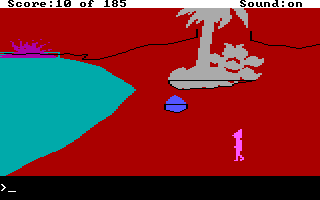 Press F6 to display priority settings for the current room.

The Mac version lets you play from an unauthorized copy as long as you first beg forgiveness from Sierra co-founder Ken Williams. When asked for the master disk, hold down Command and type 4givmeken, and then (while still holding down Command) press Return.

One item is partially coded but never used: the Dead Fish, object ID 84. This would be obtained by either picking up the dead golden fish, or by picking up the live fish and waiting until it dies.

Trying to view the object through the inventory screen will glitch the game severely, and there's no code in the game's logic that references it in any way.

However, there is a description for the item in View 86:

Word groups in the AGI engine define words and their synonyms (for example: acquire, take, get). King's Quest II has a single word group for its female characters, which means that you can call Valanice or Grandma "mermaid" and still have the parser understand you. The parser also understands perfectly if you refer to Little Red Riding Hood as a "sperm burping gutter slut".

All audio in the game is programmed with three sound channels and a noise channel. On all regular computers (except the Tandy 1k series and PCjr), only the first channel is heard at a lower octave.

Both the one-channel and four-channel versions are provided here.

The early version of the Batman theme (Sound 09) is slower and only repeats twice before ending. This isn't present in the original self-booting release.