King's Quest IV is the fourth game in the King's Quest series and the first to use Sierra's Creative Interpreter engine, although a version using the AGI engine was also released. After King Graham suffers a heart attack, the royal family mourns as his death appears to be near. Luckily, a fairy named Genesta is willing to help Rosella in her quest to help her father and tells of a fruit that brings life to people. Not so luckily, Genesta is rapidly dying off, since her medallion was stolen by Lolette. It's up to Rosella to take this medallion back before Genesta dies and get the fruit before Graham dies. 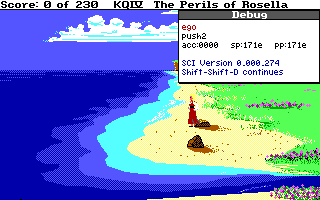 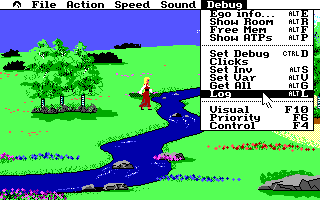 At any point during the game, open up the text prompt and enter overtime nosleep and go to a different room. A new menu called "Debug" will be available and the following actions can be entered.

Here are the controls for the menu itself:

The original version of the game had a backdoor for the copy protection. The player could enter the game by typing in BOBALU (not case sensitive), regardless of what word the game requests from the manual. This was removed from later revisions.

Not only that, but several of the backgrounds were changed between the original release in 1988 and the subsequent re-releases and ports the following year. A lot of these backgrounds actually made the background objects (usually trees) less detailed so you focus more on the foreground, along with standardizing the art style.

The background flora became nothing more than silhouettes. The flowers are more densely packed and there appears to be less of them.

The two shrubs in front of the pool have been removed from the 1989 version.

The shading on the roof is darker and a few trees were removed.

The skull cave got some more detail.

The house has its lights on in later versions.

There's some background shading as well. The rocks' shadows became less cartoony, but the front of the rocks is more like a cyan color.

The night backgrounds are unique artwork in the original version, but the daytime backgrounds are re-used in the 1989 re-releases and only the night sky is a unique graphic.

A sprite of what appears to be a beetle. The sprite is among the last of views and is only present in the 1988 release.

The Frog Prince walking ahead and behind. The Frog Prince zips off to the right once you turn him back into a human and disappears thereafter, thus leaving no opportunity to use either of these sprites.