King's Quest V is an adventure game in which King Graham of Daventry must save his family and castle from the evil wizard Mordack. It utilized a new icon-based interface instead of the old parser, drawing much criticism from hardcore adventure gamers. The puzzles tended to be rather odd and difficult to figure out, and it was easy to get stuck through the illogical game puzzles.

Also, Cedric the owl is about as annoying as the one in The Legend of Zelda: Link's Awakening and perhaps moreso, although he does save Graham's life.

Early versions of some of the cursors found in the CD version of the game. 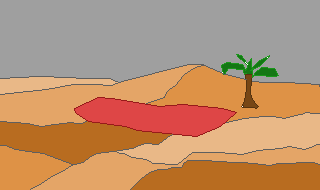 A rough placeholder for a screen of the endless desert, only present in the CD version. The red blob has no real in-game equivalent.

Presumably, this is a programmer-art version of the desert oasis screen.

An alternate death graphic for when you are locked in the Swarthy Hog Inn exists. It was replaced with the generic tombstone death graphic in the final game.

ID 2 is text describing the boat. Not used because this screen is only seen in cutscenes.

Similarly for ID 4, which describes the island.

ID 3 is some unused text for Graham being killed trying to swim away from the island. Although it's possible to do that, this message isn't used. The text also suggests this death might take a while to trigger rather than happening immediately as in-game.

ID 0 has some more text left unused because this area only appears during a scripted cutscene.

ID 0 contains a placeholder description of the sailboat that Graham uses to go to Mordack's Castle.

In development builds of Space Quest IV, *** denoted text that should be rewritten.

ID 9 (0 in CD-ROM) mentions that Graham is unable to push the sailboat without additional equipment, giving assumptions that the sailboat presumably was larger. In the final release, it's small, and you can push it without help.

Judging by its position around the voices that belong to Harpy Island in the raw audio file, it would have been played when Graham picks up Cedric after being hurt by the Harpies.

A wacky one hidden in the floppy disk version that was removed from the CD-ROM release and other future versions: In the snowy mountains, play until you've destroyed the sled (you might want to save before going any further with this). Next, use the cloak on the broken sled, and the game will call a slightly altered version of the logic script used for the ocean, allowing you to sail around the screen. Using the cloak on the sled again will cause a sea monster to appear, along with a greeting from a programmer. "O" may refer to Oliver Brelsford, one of the game's programmers, while "Lisa" is unknown and uncredited.

Then, because this is King's Quest, the sea monster pushes Graham off the cliff, killing him instantly.