Metal Slug 6 the sixth installment of the Metal Slug series and the first and only arcade release that is not on the Neo-Geo, instead being released on the Atomiswave arcade system.

There's not much to be uncovered here - unlike previous games SNK seems to have cleaned up on their act on leaving level stubs behind. 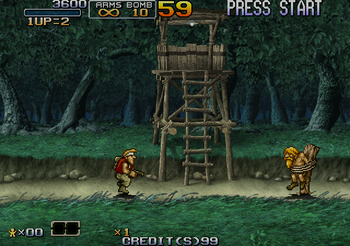 A warp of the second mission puts you near the watchtowers. 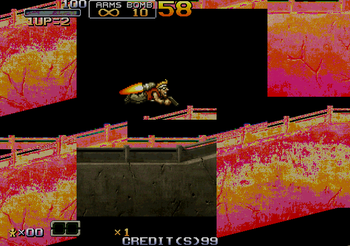 The actual unused area - a black screen filled with garbage tiles, with the player on a jetpack. Devoid of enemies or obstacles, at least until the very end there's an invisible ground and a slight slope. Scrolling through a little more would transition you back to the start of Mission 2. 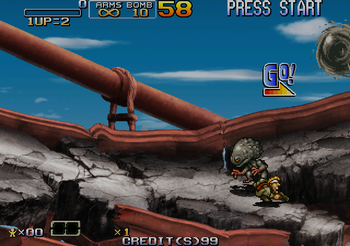 A warp of 4:1 that starts you at the fork in the road. 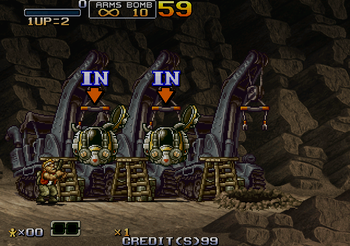 Yet another warp that drops you before the drilling machines at 5:2. 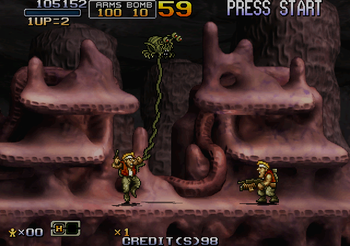 This area warp starts you right before the fight with the brainwashed ally.

Warp that puts you right at the final boss.

Ralf and Clark get their versions of unused animations from the previous games, seemingly using Metal Slug 5 as the base.

Ralf and Clark has their own win animations, and so these are rendered unused.

The old alternate turn and shoot, looking up, and turning while looking up animations returns. However, these animations are not quite complete.

The throwing animation with the dual machine gun as seen here still cuts off like it did in the previous game, for instance.

The Protogunner has an unused frame for firing its cannon while in mid-air. It does not even animate in that state in-game.

Unused and partially-unfinished conversions of the MV-280B jeep into the MV-280C added in this game.

Only two frames of animation are used during the cutscene at the end of Mission 2, so these extra four frames go unused.

These graphics are loaded during the first screen of Mission 5 and are even visible off the side of the screen if the Shrunk Screen Mode dipswitch is on. Only the second animation is visible, so the first one probably isn't animated correctly.

These frames are stored at the end of the infected soldiers' landing animation and are minor edits of their idle animation. Likely a transitional animation they forgot to implement.

A Hunter Walker inverting itself from walking on the ground to the ceiling. The animation was later used in Metal Slug Defense and Attack.

The UFOs have an unused animation for phasing in, but they just enter from offscreen in-game.

This wrecked missile is supposed to appear at the end of Mission 2 when the train boss crashes against the wall, but the missile always explodes before then, leaving it unused.

The Flying Core in Mission 3 will fire junk as projectiles, resorting to shooting fish if you dodge it three times.