Metal Slug 5 is the first main Metal Slug game not to feature General Morden as the main villain. Kind of odd, considering that the enemy sprites are just sprite edits of the Soldiers from the previous games. This is the first Metal Slug game to be developed by SNK Playmore after SNK's resurrection, and the last to be released on the Neo Geo. The game is also notoriously unfinished as it was heavily rushed. As a result, a huge amount of content remains unused. 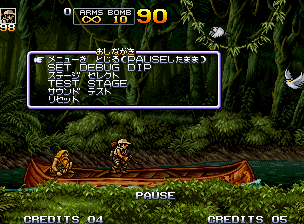 Start the game, and press COIN up twice during gameplay: after pausing, the debug menu will appear - with options to activate the debug dipswitches (which can be activated separately through other options using Kawaks) and even the ability to play on any regular level, and even some test levels not available in the actual game. There is also a Sound Test screen. 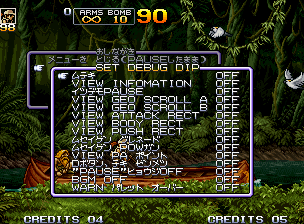 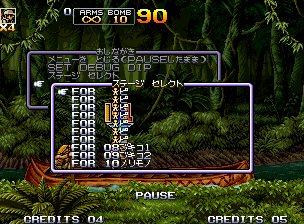 A set of test stages can also be played from the debug menu, although compared to Metal Slug 2, X, and 3, they are very lacking. Out of the 10 test stage entries, only three are functional: FOR 08 (a vehicle and weapon test room), FOR 09 (a dual machine gun test room), and FOR 10 (another vehicle test room). They all use the underground subway stage as their background and are devoid of enemies. 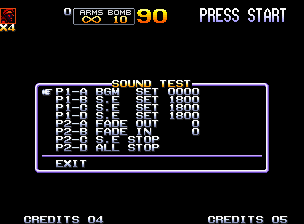 The final option of the debug menu resets the game.

While this area is actually used being the very second screen of the game, it actually has a hidden alternate path at the end, hidden by a floor sprite. The tunnel boundaries can be seen with VIEW GEO SCROLL active, but the tunnel ends in an invisible wall as it does not have an exit coded to it. 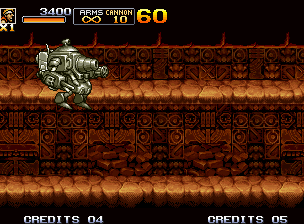 An empty tunnel with the upper floor lacking collision. At the end the path leads to the boss fight (1:9). It's possible this was to be a continuation of the final room (1:5), which ends with a similar two-tiered layout. 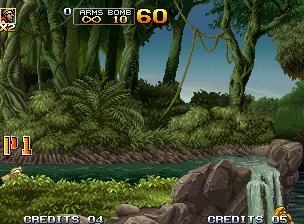 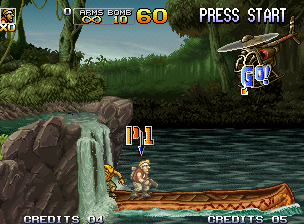 This spawns you at the waterfall in Mission 1, directly to your death and later respawning on the raft. You're stuck on it even after destroying the helicopter, however. 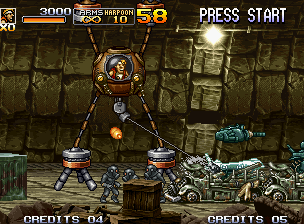 The path starts off with a waiting Augensterm, with several enemies as you progress in this unused tunnel area.

The end of the path will lead to 3:6, though you will have to ditch the Augensterm first. 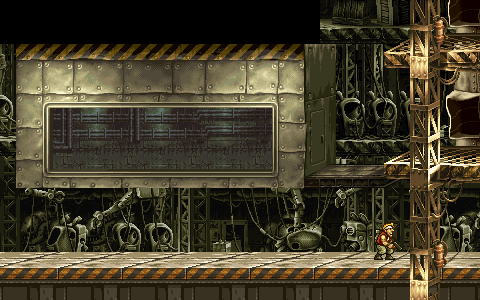 Originally, you are to spawn a bit further back to show a room of a group of robots deploying (the same seen at the end of the area, only longer) as evidenced by the pre-release videos, though that appears to have been cut as well.

As a result, your spawn point is moved further forward and the room in the final, while still available, needs some camera trickery to see it proper. 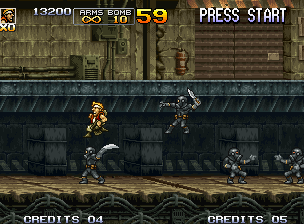 A short tunnel area with gas mask soldiers dropping down from the upper floor. This leads to the final area before the boss, 3:4. 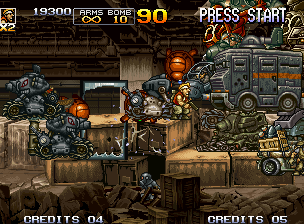 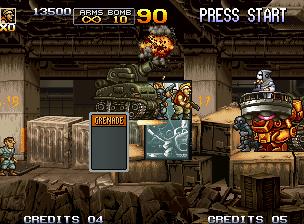 While on the surface it looks like the second area of Mission 3 (3:2), it’s actually been stripped of the normal items placement and is chock full of enemies - both used and unused - for testing purposes spawned from out of nowhere when you walk up to the crates, to the point of lagging the game.

Enemies drop weapons and items (the cut Flame Shot being one of them), and a few prisoners can be found as you progress. This area contains a prisoner unique to this area (often fan-dubbed as Achilles, though his name is actually randomized).

Should you choose to not proceed, the start of the area is actually a sprite viewer with controls similar to 3:D (see below).

This area leads to the unused tunnel area with the Augensterm (3:3). 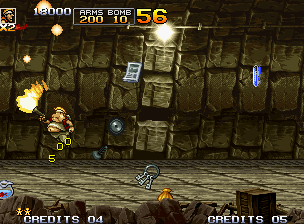 Spawns you to a tunnel similar to 3:3, devoid of vehicles, obstacles and enemies.

Shooting various parts of the ceiling will drop a mix of used and unused items, though shooting the ceiling above the first light will cause the game to crash and reset. Unlike 3:3, the tunnel leads to a dead end. 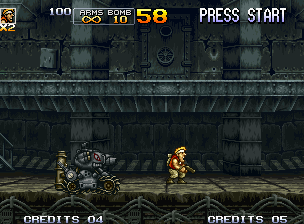 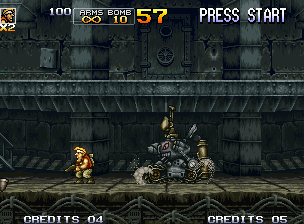 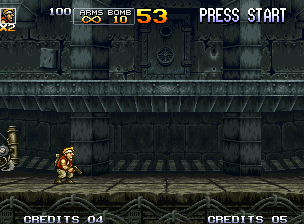 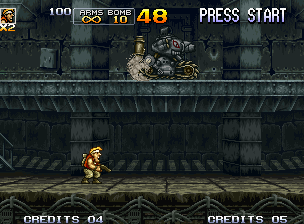 Appears to be the same as area 3:6, but instead of a Slug Gunner as usual you will find the Black Hound from Mission 1 instead. The fight is similar (aside from the enemy appearing to sink a little lower before correcting itself), except as it goes offscreen the Black Hound will appear in the top floor instead. It does not go back down on subsequent tries however.

Once it is defeated, the music stops, and you're stuck with nowhere else to go. 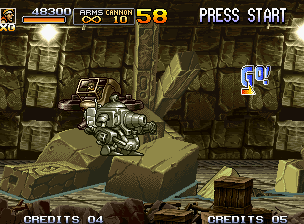 Another tunnel, this time with a container for a Slug Gunner, some ruins (some destructible) from the raft segment of Mission 1, and an invincible hover jet passing through.

It's possible this room was used for testing movement across slopes and irregular surfaces. Again, you won’t find a light at the end of this tunnel. 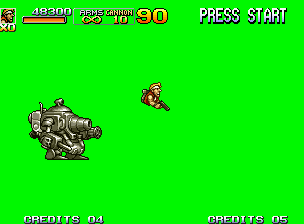 Brings you to an internal sprite viewer. This version displays static sprites and you can manually scroll through each frame of animation. The controls are as follows:

It should be noted that this section doesn't contain everything, the rest can be viewed in 3:E. Walking forward will change the background colors from green, then blue, red, black, white, and then cycles through the last two repeatedly. 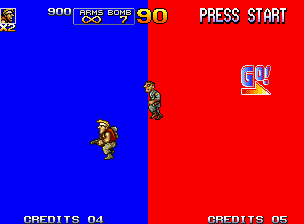 The second internal sprite viewer, and this time they are animated and have a bigger library than 3:D. The controls are slightly different, as shown below.

Aside from the sprites playing sound like the previous sprite viewer, if a sprite plays an animation that creates an object, i.e. a grenade or a landmine, that object will appear and are able to kill you. 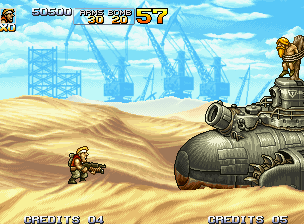 This appears to be a duplicate of the boss stage. 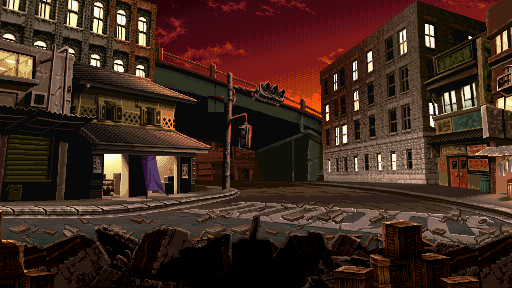 Another area with a small unseen chunk of the map, you only see from the purple curtain and onwards as you enter this area.

A normal stage warp, though it is notable that far below the screen boundary there is an unseen backdrop of spinning cogs. 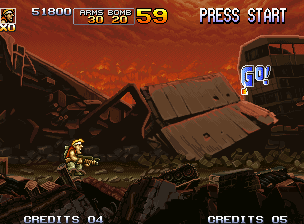 A warp of 5:4 after the fight through the apartment. It leads to the tower full of cultists and robots (5:5). 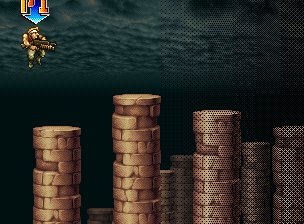 The same as the second-to-last area (5:6), but instead spawns you on one of the pillars. It is otherwise exactly the same, complete with its unused underside. 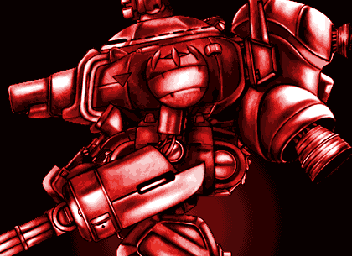 This is actually used, but only a small part of the image is seen through the viewfinder animation.

A Ptolemaic Tara carrying the MS1-styled bombs. The ones that appear only use missiles.

An unknown character piloting a jet. Probably supposed to appear in Mission 2.

Flame Shot and the Resulting Mess 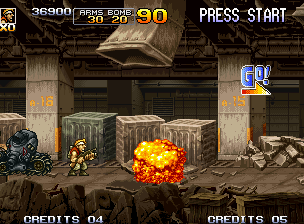 The Flame Shot goes unused in this game for some strange reason, but it can be found in the unused stage 3:9 and works as expected. Its Big counterpart does similarly work proper, although there is no way to pick one up without the use of modded ROMs.

Its absence also means that most of the burning death animations for the common enemies are rendered unused, save for the gas mask soldiers where it is used if you shoot their motorbikes.

These graphics would've been used for when the characters were fat, wielding the Dual Machine Guns, and died. Instead, in the game they just make the characters drop their weapon.

An enormous turtle that likely would have appeared within Mission 5, judging by an unused level present in the game's data. Animations present suggest it would have launched rockets from its sides and blast lasers from its belly.

(Source: A special thanks to randomhoohaas.flyingomelette.com for a majority of the unused graphics found!)