Metal Slug 4 continues the story of the fight against General Morden. Unlike the previous games, which were made by SNK before it went into bankruptcy, this game was made by a third-party developer, Mega Enterprise, and was published by Playmore, who would become SNK Playmore after SNK's resurrection in 2003. 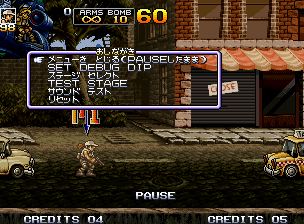 Start the game, and press COIN up during gameplay twice: after pausing, the debug menu will appear - with options to activate the debug dipswitches (which can be activated separately through other options using Kawaks) and even the ability to play on any regular level, and even some test levels not available in the actual game. There is also a Sound Test screen, and since this version of debug mode is carried over from Metal Slug 3, the Color Test menu is absent. 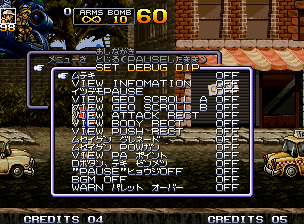 These actually don't seem to be test stages, but just an image gallery with background music. 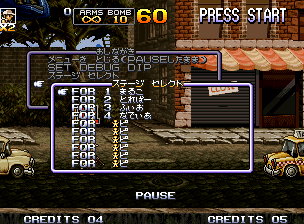 Selecting any other will cause the game to freeze. 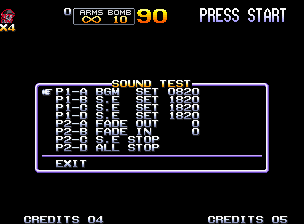 The final option in the menu will reset the game.

These 2 tilesets are present in the ROM respectively at 0x2690 and 0x2e00, and are supposed to be used to display the Parental Advisory Warning, but instead other graphics are used, which are totally out of place. (See Region-exclusive Messages) 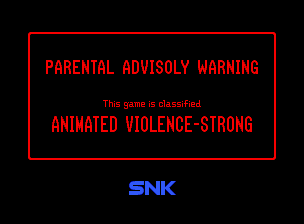 The character set normally used on the parental advisory screen was mistakenly replaced with the graphics for the character selection screens and Striker portraits from The King of Fighters 2000, rendering the screen a jumbled mess. This occurs with the MVS BIOS only, as the AES version skips it when booting.