Originally conceptualized as a game where you control the titular Metal Slug alone, the game wasn't received well during the location testing. Nazca went back to the drawing board and decided to add human players into the mix as well. This transition wasn't as smooth as it could've been, however and a bunch of stuff was left unused. But that's why we're here, right?

Present in all the sequels is the Debug Menu. Unlike the sequels, the debug menu is completely different in presentation. However, there are some debug features that can be enabled by toggling the debug dipswitches: 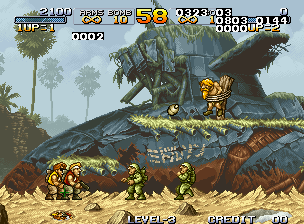 This will show 7 4-digit hex numbers whom indicate.

This will give the access to a primitive version of the later games' VIEW GEO SCROLL by pressing either combination of buttons simultaneously: A and D or B and D, with the latter having different colors and tiles. Pressing C and D will disable it.

Accessing this dipswitch also enables sound test and level select by holding Up and pressing D. For level select, the options can be scrolled through with the B button, and then confirm selection with the A button. 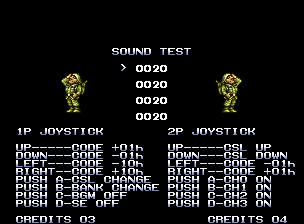 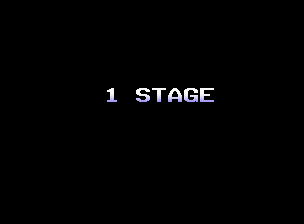 To operate level select, press the B Button to go to the next option, and press the A Button to select it. Available selections are shown below.

This dipswitch once enabled is basically the precursor to the "D Kills Everything" debug button in the later games, however the execution is much different here.

By using Player 2's controls, hold Right and press the A Button to destroy all enemies and objects on-screen.

This dipswitch enables invincibility for the player and the Metal Slug, at the consequence of the HUD not updating ammo, bombs and score. Even if this switch is turned off, players cannot advance to the next level thus necessitating level select listed above. 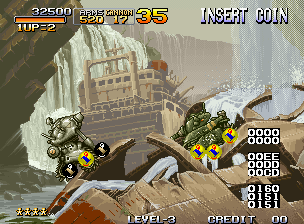 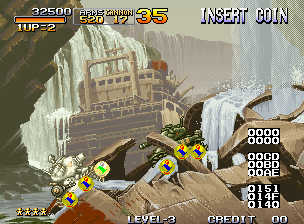 This dipswitch specializes in tank tread physics, displaying coordinates and graphical indicators to the Metal Slug and the Girida-O tanks. The coordinates remain until either one or both is on-screen, and will cease operations once it leaves the screen or is destroyed.

The coordinates and their purpose are shown below.

This will also show 3 sprites under any Metal Slug and Girida-O's thread, which will determine the tank sprite rotation amount while walking on a vertical drop. In that case, the 3 sphere sprites will result misaligned and the Metal Slug sprite colors will become brighter, except the Vulcan.

When jumping, the 3 spheres sprites will automatically align, while the Metal Slug sprite will return his normal palette and the 2 sphere sprites on the ends will change their color to black. When it lands, if there is a sphere which is not touching the ground, it will change its colors to brighter ones.

If there is a Girida-O in the screen, it will also show its 3 sphere sprites and the debug values will point to them in place of the Metal Slug's ones. However, the Girida-O palette won't change when its spheres get misaligned.

At one point, the playable characters were to be more flexible with varied movements. This was axed for a simpler yet smooth set - and despite the fact that most are not used at all they all appear repeatedly in later games, to the extent that the same animation is made for other new playable characters and they still remain completely unused. Someone in the company seems to not want to let it go.

Some of them does actually get used in varied ways, as will be mentioned below.

Technically, these were used in the game. It is obscured by the stage title call. In missions where you drop into the area via parachute, hold left and fire. Arcade version only allows pistol starts, but console ports on the Saturn and PSX has an option that allows you to keep your weapon after stages during Combat School, allowing them to be seen.

These were redrawn and re-purposed for the helper NPC Achilles in Metal Slug 5 and even so he is unused in the proper game. A frame of Tarma's fourth animation is used in the credits scene of Metal Slug 7/XX.

Lobbing grenades, front, backwards and backwards with weapon extended. Only the third and fourth sets are used for each character with the same method of shooting backwards, again, obscured by stage title call. Marco's first throwing animation finally sees its use in Metal Slug Attack, while the final frame of the animation is used in the credits scene for Metal Slug 7/XX.

The later new characters would receive their animations for the alternate crouch throw... and it remains unused.

While the second set for both Marco and Tarma are used for the obscure shooting and throwing the grenade backwards, the rest simply won't appear in the game proper, possibly on how overly complicated they all look.

Supposedly turning around while firing was to be smoother.

A weird sprite of a soldier with a distinct uniform, which somewhat matches this concept art, suggesting that this is the original Metal Slug pilot from the tank-only prototype version of Metal Slug. This and the Metal Slug itself has similar amount of rotations (10, covering angles that is unused as well) too.

Soldiers throwing grenades similar to those used by the players, a remnant of the early location tests where freed soldiers will tag along and help.

An exclusive remnant of the said prototype, where allied soldiers will throw pipe grenades while running, whereas regular infantries will stop to throw grenades. No pineapple grenade of this sprite exists.

These were partially reused in the console ports and fully redrawn to be used for the captured Regular Army trainees in Metal Slug Advance.

Soldiers manning a mounted machine gun turret. Early previews show that they use the same mounted gun as you do in Mission 6 as allied soldiers, and when the concept was axed these later get used for Sea Satan's mounted gun in Metal Slug 4. There are no rotations pointing to the left as the early machine gun turret rotation is limited to 90-degrees angle.

These two gun emplacements on the other hand are originally purposed for the Mission 1 boss, Tetsuyuki, as evidenced by the early tank-only test versions, placed on its wings. Their graphics are found close to the boss' in the final, with the machine gun emplacement being static and the launcher have rotations for five directions downwards.

While it is used by enemy soldiers against the player, it's also usable against the boss itself if it was hijacked by friendly soldiers.

The enemy itself is actually used, but it appears to have 2 unused animations and a frame. The animations are practically identical to those used for floating and firing, except the fact that the bazooka is aiming diagonally.

It would find use in Metal Slug X's unused area 8:1, for some odd reason.

This tank, named as the KT-21 from the game's concept arts survived long enough to have a good set of animations. Its animations make it seem to be the prototype of the Di-Cokka. A fired shell exclusive to itself exists, which is similar to the unused Di-Cokka shell.

A vehicle with sandbags and appears to be falling. A destroyed version of it exists too.

Would be fitting for Mission 3 or the ending sequence.

These kids show up in all games, and yet didn't show up in the game at all proper.

Only one frame each.

The vulcan guns, detached and still sparking before landing on ground (or water) before exploding. In game, they spark in blue and explode in mid-air instead.

Parachutes with clamps - probably for parachuting in Metal Slugs but it was never used.

A fired cannon shell, found between the tiles for Girida-O and Iron Iso. Neither do the two use this kind of shell but at least the former can fire it in multiple angles.

This one is found close to the Di-Cokka's tiles. Originally that tank were to fire this shell than fireballs, as shown in various early footages of the original build of the game. This is similar to the unused tank's projectile detailed above.

Early turret used by friendly soldiers in Mission 6 has only one ammo box and three rotations. The final version has two ammo boxes with one on each sides, and has more rotations.

Discarded bullet casing. Early prototype screenshot shows that the machine gun turret in Mission 6 and the vulcans would originally eject these casings. This would be later used for soldiers with miniguns in later games and then the Slug Gunner in Metal Slug 5.

Translucent balls with roman numerals in it. The static ones are used for debug features described above.

This should have been shown in the title screen in conjunction with the unused soundbyte below, but they don't. They appear to be animated to rotate as well.

It even has unused sound found at 0x002C identifier, which means it was to be used with the logo. This sound can be listened by using the Neo Geo UniBios, and can also be heard in the first track of Metal Slug Complete Sound Box OST.

Seems to be early pick-up sprites of the special weapons.

This monkey is unused in the arcade version, but shows up in the console ports as a part of the loading screen. Its latest appearance is in Metal Slug Attack, as a loading screen element.

Technically this is used in the AES version as the cursor for the main menu. Originally its purpose was to be the life counter indicator for the early test version where you only played as the tank.

This is the health bar for the slug, again from the early test version. Final version uses a single bar that's filled with a single color.