From The Cutting Room Floor
(Redirected from Metal Slug XX)
Jump to navigation Jump to search
This page contains changes which are not marked for translation.

Metal Slug XX is a PlayStation Portable port of Metal Slug 7. This one is the upgraded version with alternate paths. 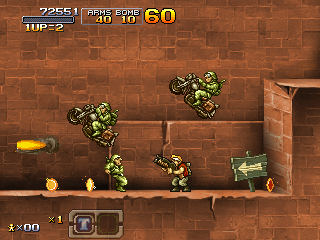 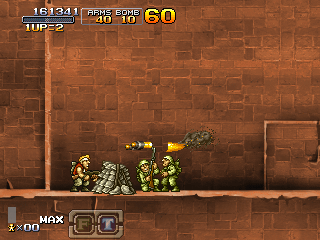 A tunnel filled with a bunch of soldiers and a particular enemy vehicle. Seemingly unaffected from remaining time, whole with slow-motion motorbikes, although the MV-280 jeeps are now invisible... without for their rockets and firing effects.

(Source: A big thank you to all of your hard work.) 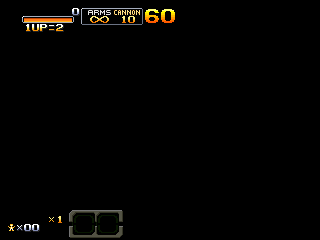 This leftover is a pitch black level. Going to the right leads to a boss fight with Allen O'Neill. 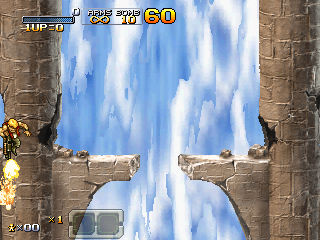 This is an empty duplicate of the Mission 4 boss arena with an invisible platform in the lower-left.

The PSP version of the game's graphics can be found in the DATA.BIN file in the USRDIR/ directory.

3 frames of the throwing-while-crouching animation from the previous games were converted for Leona, but not the rest.

One of the two unused frame of unused alternate shooting up and turning around. The second one is Eri's.

Leona drowning, but there's no place to drown in this game.

A variant of Leona's up-and-turning frame. The sprite in-game doesn't show her other arm supporting the gun.

Leona borrows most of Eri's edge-wobbling animation but cuts out the heart-clutching part when it plays in-game. The transitionary frame and machine gun version are unedited.

Unlike Eri, Leona doesn't play this animation after firing the HMG for a prolonged amount of time.