This game contains two unfinished boss battles, both belonging to the first chapter of the game, "Deathmatch of Creation". These boss battles were shown initially in an early trailer of the game, and were later cut for unknown reasons. Even though these battles can be accessed through hacking the executable, they aren't completely playable, due to the game crashing as soon as something hits the player.

Almost all the stages from previous games are included in the game files, though they lack music and sound effects. They can be played by hacking the file that controls the stage selection screen. 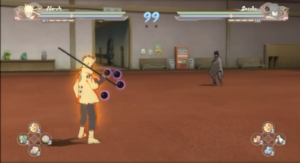 A stage from a previous game included in the files, loaded in free battle mode by hacking.

Unlike previous games in the series, many of the story mode cutscenes in Storm 4 are conveyed through stills from the anime. The first half of story mode mostly uses these slideshow scenes, while the latter half mostly uses the traditional fully animated 3D cinematics. Though it's all very inconsistent.

However, unused cutscenes still exist in-game. The game also uses pre-rendered cutscenes, which can be played realtime through addition of scripts. When played this way, the cinematics don't have sounds or music.

This suggests the use of anime stills was likely a last-minute decision made due to a lack of time to finish all the fully animated ones.