This page details prerelease information and/or media for Zelda's Adventure. 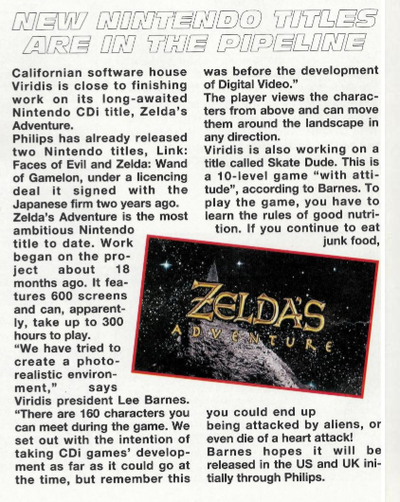 Zelda's Adventure began development sometime in May or June of 1992, a year after Nintendo gave Philips permission to make several CD-i games featuring their IPs. Despite the CD-i's limitations and a RAM shortage caused by the decision to use photo-realistic backgrounds, the developers in Viridis still had huge plans for the game.

The December 1993 issue of the UK CD-i magazine featured the first known preview of Zelda's Adventure. In it was information about how big the game was going to be, containing 600 screens and 160 NPCs, and taking up to 300 hours to complete. This was cut down for the final game: a third of the screens and more than half of the NPCs were culled, and the game's playtime was shortened down to around eight to sixteen hours. The same magazine would later review Adventure in the August 1994 issue, where it gave a release date of October of the same year. This never happened, however, and the date would end up getting delayed to mid-1995.

(Another CD-i title by Viridis, Food Dude, was briefly mentioned in the first preview as well. This game was never released, but this didn't stop its protagonist from showing up in the final game's data.)

Zelda's Adventure was also meant to have more music than just the ambient noises heard in the final game. Initially, Viridis had planned to have the band Echo & the Bunnymen compose the game's soundtrack, but this plan fell through for unknown reasons, most likely a low development budget. The game's music would later be composed by Mark Andrade, although most of the tracks that were created by him wouldn't make it to the final game.

All of these sudden cuts were attributed in developer interviews to Zelda's Adventure's somewhat destructive testing period, which happened after Viridis laid off most of the game's staff. This phase took roughly two years to complete, longer than the time it took to develop the game, and was split into at least two separate phases. (While the exact dates are unknown, the first full version was sent to Philips around the second quarter of 1993, while the final version was built on March 27th, 1995.) This long testing time was partially due to various flaws in the game's terrain collision and (possibly) the various things that had to be removed from the game.

Philips had initially wanted to release Zelda's Adventure in both the United States and Europe, but when the game was ready to be mass-produced, Philips had stopped publishing CD-i games in North America. As a result, the game became a Europe-exclusive title. This was a last-minute decision as a catalog number was made for the scrapped US release, 690 2292, and the game would be listed on an American CD-i order catalog. The August 5th, 1994 prototype also has the US catalog number on its label.

(Source: "The final CD-i releases by Philips Interactive Media of America were Flashback and Chaos Control")

A 90% complete build of Zelda's Adventure was shown off in the February 1994 issue of Electronic Gaming Monthly. The game appeared on two separate pages: first, as a special feature, and later on as a proper review. While most of the images shown were either cutscene, demo, or tutorial screens, two of them are rather noteworthy.

The first is a screenshot of the opening areas of the Shrine of Earth, showcasing how the dungeon worked. Some Tektites can be seen here, which were removed for the final game. Interestingly, the Shrine of Water loads in some Zol sprites in its opening area. Was the same true for the rest of the Shrines? 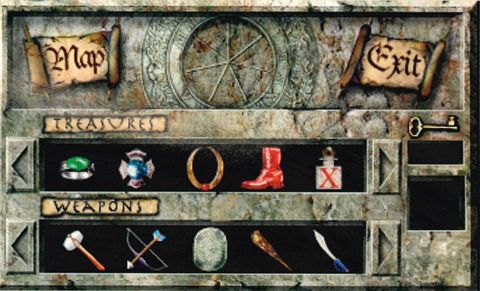 The other is a picture of Zelda's inventory. Three cut items can be seen here: the Opal Amulet that Shurmak was going to give to Zelda, a boulder spell that was completely removed from the game, and a similarly cut scimitar spell. In addition, the Gold Necklace and Jade Ring spells are listed as treasures instead of weapons.