This page details one or more prototype versions of Addams Family Values (SNES).

A prototype of Addams Family Values, recovered from loose EPROM chips from an anonymous donor, was released by SNES Central via the VGHF on June 30, 2021. The prototype is in an even earlier state than the cancelled US Genesis prototype found a few months earlier.

Debug commands are available by default in this build, several of which are mapped to the shoulder buttons that went unused in the final game.

Press R while playing to enter the debug menu. Unique to this build are the Level, Zzap, and Audio Mode options, while Restore Energy, Display Conditions, and Infinite Energy are not present.

It functions the same as the final game: select Continue to resume normally, or Exit to warp to the location set in Section and Room.

Sets the Conditions (storyline flags). The 7 available selections should represent the 7 dungeons, but this has not yet been verified. Note that only Levels 1-3 are programmed. Levels 4-7 all point to empty subroutines. Also note that you must press A to apply the changes once you select a level with the D-Pad.

Exactly as it says, but you must already have the items in your inventory.

Sets the damage level of Fester's lightning bolt attack. Values 001, 002, and 003 are for red, green, and blue Zzap, respectively.

This is presumably meant to display a line of text like the Messages option in the final game, but it appears to be broken/unfinished. Selecting it will just reset the index to 000.

Press L while playing to toggle the 16-bit disable collision flag stored at RAM address 7E0A44 to walk though walls and NPCs/enemies.

Press Y to open the Diary (map), even if it's not in the inventory. Note that this is the only method to access the map in this prototype, as trying to select it from the inventory gives an error message that the item can't be equipped.

Press Select while playing to view a cutscene. It's hardcoded to display cutscene #$00 (the first cutscene of the mansion gates), but Pro Action Replay (PAR) code 81824C?. can be used to change the index, where "??" is a value in range $00-0B.

(Note: the inventory screenshots above have been edited to remove the hand cursor and currently selected item name for easier side-by-side comparison.)

Have Game Genie code EEA5-0F64 or Pro Action Replay (PAR) code 00C976FF activated on boot up to start the game with a full inventory.

Item index $03. This was turned into the Stone Twig Key in the final game. The palette for the icon and portrait was changed accordingly.

Item index $05. It became the Stone Key in the final game, and its icon and portrait palettes updated just like the Twig Key.

Item indexes $08-0F. Portraits for the 4 different cookie types exist in this prototype and all but the Crumble Cookie portrait (green cookie) go unused. They were later deleted.

Item index $11. No checks for this item have been found in the text scripts (event and map scripts still need to be checked). It has no effect when used, and its purpose is still a mystery. The portrait, which was deleted in the final version, is present but its palette is swapped with the Slimming Potion by accident.

Item index $12. The portrait palette got mixed up with the Portal Potion in this prototype as mentioned above.

Item index $1B. It was later renamed to the Journal. Its icon and portrait of a tattered map was changed to a hardcover book. It can't be equipped/used with A as in the retail release.

Item index $26. This ended up being replaced by Shockwave. It has no effect when used. The instruction manual packaged with the retail game, which details several prototype elements, describes the Hourglass as follows: "Use to briefly freeze all attackers on screen."

Item index $2E. See the retail page for more info. It has no effect in this version of the game, either. Morobe doesn't even drop it in the final dungeon, meaning the portrait goes unused in this version, too.

The KEYS text isn't centered in the prototype.

These portraits with IDs $30, $31, $32 and $33 don't exist in the final game. The instruction manual packaged with the retail game, which details several prototype elements, describes the batteries as follows:

Level 2, 3 and 5 refer to the dungeons the batteries could be found in.

In this prototype, instead of finding batteries directly in dungeons as the instructions suggest, Morticia will give the red battery as a reward for returning the Black Rose, Skull Rattle or Headless Teddy. It's likely this was temporary programming and that the green battery was planned to be in exchange for the rattle and blue battery in exchange for the teddy bear, based on when the items can be obtained during the game. The orange battery is assumed to have been the initial battery when beginning, while the red, green and blue batteries are the upgrades and correspond with the 3 Zzap levels that can be set in debug menu.

The final game abandons the entire battery idea and Fester's Zzap strength depends on his current HP instead. From the available evidence, it's easy to come to the conclusion that this change was made because having to spend any length of time using the weakest, shortest-range red lightning bolt is a frustrating experience. Fester would be stuck with it for several dungeons until the green battery could be obtained, and there's no guarantee that the player even finds the battery or item needed to be exchanged for it.

The left gate has been mirrored, and the right gate has has shifted left. The text description is totally different. Also note in the final game the text is shifted down one line and the border uses a darker palette (these 2 changes apply to all the rest of the cutscenes, too.)

The single quote is missing its graphics tile in the prototype, or assigned incorrectly. Also, there's no period at the end of the text string.

In the final game the stone tree has a cave entrance in the middle, and the entire tree and clouds were shifted to the right in order to add a boulder and wall to the picture. The prototype describes the scene as creepy.

A different background color surrounding the cloud. Also note the prototype uses the wrong text string (it's meant for cutscene $07). This off-by-one error also affects cutscenes $07, $08, and possibly $09. The correct text string is present in the ROM as follows:

Another off-by-one error. The mansion cutscene displays the pipe ready to burst text. The correct text string is present in the ROM as follows:

Another off-by-one error for the bursting pipe cutscene, using text assumed to be for cutscene $09. The correct text string is present in the ROM as follows:

It's unknown if the incorrect text string used for cutscene $08 was supposed to be used here. If so, it's unclear what cutscene the "You have a bad feeling about this" text is for. 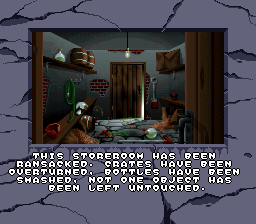 This cutscene isn't in the final game. Its index $0A is used for the Congratulations ending in the retail version.