This is a sub-page of Proto:Dr. Mario (NES).

The PlayChoice-10 prototype of Virus was found installed in an otherwise-unremarkable PlayChoice-10 arcade cabinet in 2012, which was likely used to playtest new NES games at a Chuck E. Cheese's restaurant at one point.

This build is much like the prototype of Super Mario Bros. 2, in that it shows the game during the transition from its original style to its more familiar one.

The title screen has begun to take the form of the final, with a new (more "bubbly") logo compared to the first two builds, a checkered background, and the option of 1-Player or 2-Player modes. The logo still has no animation, the menu border doesn't have its distinctive pill shape yet, there are no characters visible, and no music plays. There are also no copyright or trademark symbols, although both are present in the CHR-ROM and the former had been used in the earlier Virus builds.

The background was changed from a sort of ruby color to a more pleasing green, and the squares that make up the checkerboard pattern were shrunk from 16×16 to 8×8. There's still no gameplay demo at this point, though. 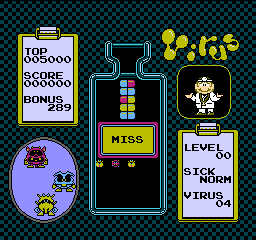 These graphics were overwritten with other tiles in later versions.

This pointing finger may have been an idea for a cursor.

A trademark symbol that probably would have been placed next to the Virus logo.

In the final, the viruses laugh at the player if they fail to clear the level. At this point, they move for a bit then stop completely, rendering these frames unused.

Two bad, dreary, and unused tracks remain in the ROM, and can be played by changing RAM address $06F5 to the corresponding ID value (or using the provided Game Genie codes). They were removed in later builds and the final.

Look at the schnoz on Mario! The good doctor wasn't quite done with the corrective surgery at this point, but it's closer: he gained a stethoscope, and he has a black outline instead of brown. His eyes are bigger and his quasi-realistic shoes turned brown, but their shape remained until the final when they were swapped for his signature boots.

Mario's swollen head and hands were thankfully fixed, he now faces directly towards the camera, and he was given a mouth. That's always nice to have. His eyebrows were recolored to black in the final game.

More changes on the nose front: the Yellow Virus' "nose" was replaced with a more expressive mouth. Also, its shoes are no longer the same color as its skin.

See what difference a mouth makes? The final sprite is clearly laughing, while the (unused) Virus sprite may or may not be primed to explode.

The actual Yellow Virus tiles were changed as well, though one frame of this older design is used in the final: to create the animated virus tiles, the game switches between two CHR blocks. In this build, these both use the same design; in the final, one of the blocks uses this build's design while the other uses the final design.

As a result, one of the changed frames is never used. Correcting this will result in the following:

The corrected animation would later show up (with additional shading) in Tetris & Dr. Mario.

One last nose-related change: the nostrils on the Red Virus' laughing frame were moved up to a more acceptable place, its shoes were squared off, and its tail moved to the other side.

The Blue Virus is missing the inner part of its left(/right, since the graphic flips) ear, which was filled in for the final.

The Blue Virus' final laughing frame is more "standing" and less "trying to do a split".

The clipboard became two pixels wider and taller in the final. Like a real clipboard, it's not very interesting.

The sound effect that plays when gameplay speeds up (after every ten Megavitamins dropped) was completely changed in the final. The first two builds merely used the Tetris level-up sound.

The "stage clear" theme is slightly different and loops continuously, unlike the final version (which also got a unique theme for Chill, as mentioned above).

Fever has an extra percussion beat towards the end of the loop. It's worth noting that the Game Boy, SNES, and Super Smash Bros. Melee versions of the track feature an additional bridge immediately after the final version of the song ends - precisely where this beat is located in this version.

Due to a minor error in the music data, the lead instrument in Chill is louder than it should be at the beginning of the track.

The 2-Player menu screen has its own music, unlike the final which uses the 1-Player menu theme for both. A minor variant of this track was later used in Nintendo World Championships 1990 and Hello Kitty World.

Whereas the final has a somewhat expansive Game Over music sequence, Virus only uses the brief initial sting, although the percussive sound at the start has less "oomph" to it. The Game Boy Dr. Mario uses this shortened tune as well.