This page details one or more prototype versions of Ghosts'n Goblins (Arcade).

This prototype board of Ghosts'n Goblins was dumped in September of 2012. This board comes not from Capcom, but from Romstar, Capcom's erstwhile North American distribution partner from the 80s.

Important Note: The current dump of this prototype board uses the final game's Graphics 0 (HUD) chip in place of the prototype's chip. This is why certain graphics, like the lives icon and the weapon border, use incorrect colors.

The Armor pick-up has a large collar in the prototype game, and the arms are a touch thinner.

The fireballs were touched up a bit to make them easier to see.

One of the tiles that the larger rock tiles replaced was a small boulder. It's nowhere in the final game, and it looks like the coding for this object was never started on. Good riddance to bad boulders, I say.

This cavern tile is a bit more detailed in the final game. Not much though, just slightly.

These blocks in stage 5 use a special faded palette in the prototype. This palette and stage 5's layout in the prototype suggest that these would be background tiles. They're foreground tiles, and completely solid, in the final game.

Every HUD palette but #08 and 0D were altered in some way between versions:

The "TAKE A KEY" message was changed to all-caps in the final game, and the color of the text was changed as well.

The frog transformation sound was changed to be more realistic. You've been transformed into a frog, right? It sounds nothing like what you hear in the prototype.

The Game Over tune was sped up in the final version.

The alternate Stage 5/6 track is pitched lower in the prototype. Strangely, the IDs for the standard and alternate tracks were switched between the prototype and final games.

This track is in both versions, but it's only heard in the prototype. It's a nice little jingle that plays whenever a boss is defeated. 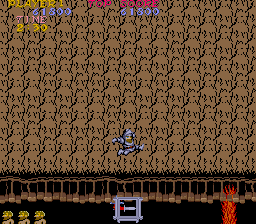 The "SOUND CODE" text and current sound number are terribly misaligned. Also, the extra life text is bugged: It's cutting off one more line than it should, so the "AND EVERY X0000 PTS" line is missing.

Useless trivia: This screen was never changed after the title screen graphics and palettes were put in, which is why the extra life numbers are using such a hard to see palette. Now you know.

The title screen is rather spartan. There are no title graphics, just text. Note the early title, Ghost'N Goblins; all known versions of the game use the plural "Ghosts" on their title screen, but the "Ghost" title does appear on a flyer for the arcade game, the PAL NES version's packaging and the spine (but not the cover) of the UK ZX Spectrum version. Oh, and the "ALL RIGHT RESEVED" text isn't on the prototype title screen.

Look at how colorful the high score list is in the prototype! None of that in the final game.

A common difference between versions is Arthur's starting position. In the prototype, he starts at the center of the screen. This makes for a perfect transition between the intro and the start of the gameplay, but it doesn't work for every stage in the game. So, Arthur starts left-of-center in the final game.

See? Common difference. Arthur also starts in the air in the prototype version.

The biggest difference in any stage appears in Stage 2. The large house in the middle of the stage is completely optional in the prototype! The stone walls in the final game are nowhere to be found in the prototype, so it can be completely bypassed, unless for some reason the player wants to go for a high score.

Additionally, one of the ogres in the prototype house was removed, and another coin was added to the house in the final game.

The bats at the start of the stage are in pretty odd positions. The positions might be left over from an even earlier stage layout. They're properly on the ceiling in the final game.

There are no tiles transitioning from one cave type to the next in the prototype game, so the first section just kind of...stops. This can be seen in Stage 4 as well.

The Red Arremer's initial action was changed from sitting to flying from the right of the screen, and its position was moved to the right as well.

Another Red Arremer changed from sitting to flying.

A sitting Red Arremer was added here in the final game.

One last flying Red Arremer appears near the end of the stage in the final version.

Arthur was moved to the left slightly. Notice that Arthur's position is identical between stages in the prototype, but in the final game it's different in each stage.

The rather dickishly-placed enemy was removed from the final game.

All of the eyeball platforms, and the Red Arremer, were pushed to the left.

Stages 5 and 6 are missing the most tile graphics in the prototype, so a lot of wall sections appear black. Plus, the game freezes right after the stages start. Nevertheless, the stage layout for Stage 5 is almost complete here, though there are two major layout differences.

There's a ladder missing from the prototype game that's present in the final version. It's unknown how the player would get to the third set of platforms, unless there was a vertically-moving eyeball platform that the player could use.

The top-left ladder was moved to the left, just a tad. It seems that the rocky wall at the top-left (or where the rocky wall should be) pushes out more to the right in the prototype, which is the reason why the ladder change was made.

Due to the way the camera works in Ghosts'n Goblins, the spikes at the top can't be seen in the prototype. They were moved down two blocks in the final game.

The structure where the gate should be seems to be a lot larger in the prototype.

Unlike Stage 5, Stage 6 has barely been started at all. This small chunk is all that's in the prototype ROM.

The stone floor is doubled up in the prototype; There's but a single layer in the final stage layout.

Additionally, the rocky wall juts out further to the right in the prototype, making the Unicorn boss section more cramped than it is in the final game.

That's pretty much all that can be said. I mean, look at it.