Three years after Ghosts'n Goblins, the demon realm has reappeared, and the people in Arthur's homeland have had their souls stolen. Arthur doesn't cotton to that.

He also enchanted his sub-weapons with magic power. Too bad he didn't do anything about the one-hit armor.

There are multiple debug functions hidden in the game. Place this MAME code in ghouls.xml to change the Cross Hatch test in the service menu to the appropriate test. 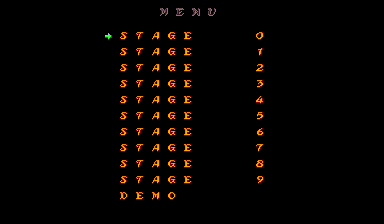 Each stage has three options: Scroll 1 (doesn't seem to do anything), Scroll 2 (foreground layer), and Scroll 3 (background layer). 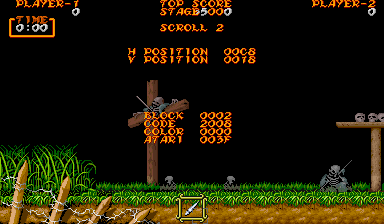 These are rudimentary viewers for all three tile layers and sprites. 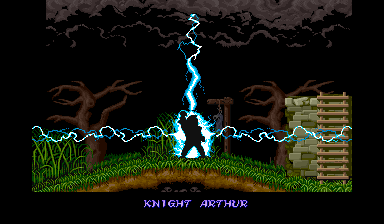 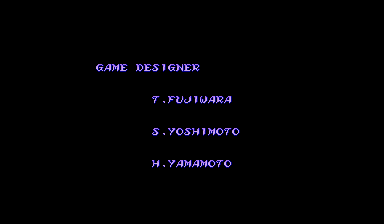 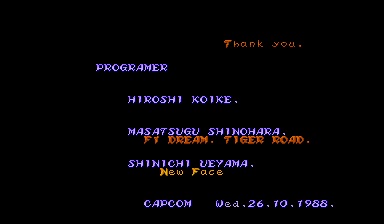 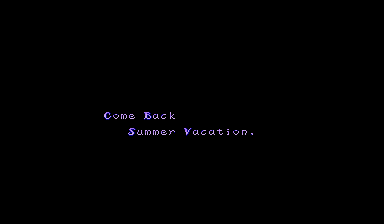 When the game gets to Knight Arthur's scene in the cast list, hold 1P or 2P (Depending on which player beat the game) Up + Button 1 + Button 2 before the scene cuts out to see a list of designer and programmer credits.

Game Designer Tokurou Fujiwara mentioned a more ambitious design for the game in a 1991 interview:

"Also, we originally had a far grander design in mind for Daimakaimura. After the second stage, each stage would have branching A and B routes, and you’d get to choose your path after every stage. Then on the second loop you’d be forced to play the stages you didn’t choose the first time around. Unfortunately, we ran out of memory and time so those extra stages had to be cut. However, even though we shelved those stages, the alternate stage 2 (the water stage) was secretly resurrected and used in the Super Famicom Choumakaimura as the second half of stage 2."

The stage list in the level viewer has slots assigned for the alternate stages:

At the time the game was completed, only Stages 02 and 04 had any work done on them, though their block IDs and graphics were overwritten at some point in development. Stages 06 and 08 are empty and use placeholder foreground and background palettes.

Seems to be a vertical and horizontal level. The block IDs were reclaimed in the final game's penultimate level (Stage 07 in the level viewer).

It's likely that Stage 02 was the alternate stage 2, with the seven-by-three block near the start of the stage being the ghost ship and the long horizontal stretch being the long sea area. The foreground and background palettes seem to support this theory.

A pretty long horizontal level. The block IDs were reclaimed in the final game by Level 4 (Stage 05 in the level viewer).


It's less clear on what this level was; it doesn't seem to have been ported to Super Ghouls'n Ghosts. The palette suggests a fiery or volcanic level. There's no background palette for this level, but it's unknown whether the background wasn't finished in time or if the level just didn't use the background layer.

Tracks 03 and 04 are used for the Top Score and High Score tracks, respectively. However, only 22 seconds are heard from either track. They're actually much longer, and they fit perfectly with the ending sequence!

Track 03 was used for the ending text.
Track 04 was used for the cast list, though it only syncs up if it starts playing when the first boss appears. The minor enemies were probably added in later to sync with the new, longer track.

The final track used for both sequences is track 19.

Sprites for coin and money bag bonus items. These both appeared in the first game, but they're absent in this game.

A king that doesn't appear in the final game. Is this Princess Prin Prin's father?

Only a few tiles from the cut water stage weren't overwritten by other graphics. The palette may not be correct, but it's the closest match in the Stage 02 palette set.

One cluster of unused tiles is almost identical to a similar chunk from Super Ghouls'n Ghosts.

Known as Daimakaimura (大魔界村, "Great Demon World Village") in Japan. When the logo appears in the Japanese version, the "Dai" in Daimakaimura is hit by lightning, which then flows through the rest of the logo, making a pulsating border. Besides the different title name, the international version was completely redesigned with a spectral gargoyle as a backdrop. It still kept the pulsating border from the Japanese logo but added flickering flames inside the letters.

The international (World) version has different gameplay demos compared to the Japanese and American versions. It shows the same parts of the game but the gameplay is slightly different.

The typo "albe" in St. Michael's message was fixed in the American version.

Despite the poor translation and numerous typos in the ending text, only "mazic power" was fixed in the American version.

The USA version is the only version that credits Hiroshi Koike with an actual game.