Ghouls'n Ghosts is a fairly adequate port done for the Genesis by Yuji Naka. 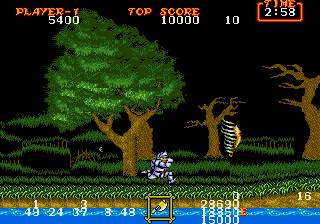 Entering Game Genie code AEZT-AAEE or patch code 2B84:01 enables some debug info. The top number indicates the sprites on-screen. However, what the other numbers represent isn't known yet.

At the title screen, press A four times, Up, Down, Left and Right. If done right, the music will stop and a jingle plays. When starting the game, the following actions are available:

At the title screen, press Up, Down, Left and Right. If done right, the music will stop and a jingle plays. Then, press one of the following plus Start to go to the beginning of the corresponding level or A to go to the second half.