This page details one or more prototype versions of Shanghai (NES). 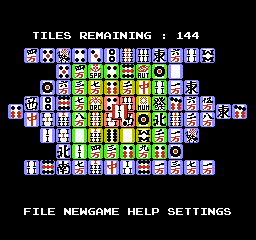 Among the Sunsoft Dev Disks was a prototype of Shanghai, which at this point is little more than a playable demo.

The final game's green background goes a long way in making the tiles stand out and contributing to an overall more visually-appealing screen than the prototype, but at the cost of the tiles losing some visual cohesion with the different colors filling them rather than being an accent.

They also can no longer afford to have five different colors for the tiles as a result, leading to the addition of a level guide to explain this rather confusing compromise.

As should be obvious from the overall comparison, the mahjong tiles were modified to remove the color accent effect, freeing up a color for the green background. The symbols on the tiles were also redrawn somewhat to make them overall larger and more readable...

...Although another reason they might have done so was to differentiate the graphics from 4 Nin Uchi Mahjong, which seems a bit too similar to this prototype's tiles to be a coincidence!

The cursor received a makeover as well, away from the utilitarian cursor of the original (which also has a tendency to blend into the white tiles). The final game's cursor also received numbered variants for the multiplayer modes.

The selection indicator also changed between versions, presumably to go with the change in tiles. The prototype simply overlays a white border over the tiles, while the final overlays an inverted version of the mahjong tiles. The bright color of the final indicator depends on that of the selected tile's level.

While the prototype just prints the ending text over the playfield, the final game clears the screen before doing so, preventing the tile on the highest level (which is a sprite) from obstructing the text should it be present. The L/R mix-up on "4 Passes in a Row" in the prototype was also corrected, and the text describing the outcome in the final was made more descriptive overall.