While confirming the Retry option during a Solitaire Mode game (accessible under the Help2 menu), holding Down + B on Controller 2 while pressing A on Controller 1 will cause the puzzle to be cleared after the restart. 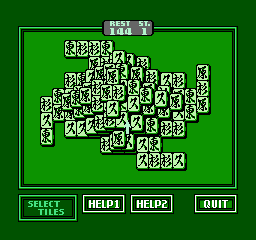 Holding Down + A on the title screen before pressing Start will enable a four-tile set that cannot be found in the settings.

These two jingles that can be found in the Arcade version of this game show up here, unused.

This was the Game Over theme in the Arcade game. In this version however only sound effects play when there are no more moves or if the time is up.

This jingle played while the tiles are being set up in the Arcade version. Here, its Name Entry theme was repurposed to serve the same function instead, perhaps due to the longer time it takes for this version to set up.