The long and fruitful relationship between Sunsoft and the looks-like-Mahjong-but-isn't genre of Mahjong Solitaire begins here, with their Famicom port of Brodie Lockard's Shanghai. 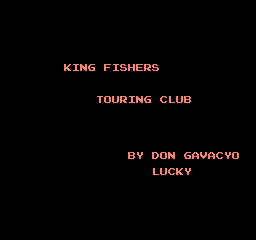 On the credits roll, holding Down + Right + A + B + Select will bring up this cute little message from Yoshiaki "Don Gavacyo" Komada and Akihiro "Lucky" Asada.

Among the title screen graphics are these bits of unused copyright text:

The name of Tokai Engineering, a dummy company used by Sunsoft. It would seem that Shanghai was to be among the titles under the Tokai name as well (predating the eventual first game under the label, Ripple Island), until Sunsoft decided that they wanted to release it under their own moniker instead.

Curiously, the bottom-right pixel of the letter K is of a different color, but appears consistent to the rest of the text here due to a single color being repeated across the palette used for the copyright info.

The number 6. It would seem that the original copyright year was meant to be 1986 instead of 1987- unusual, considering how the game was very late in '87 at that.