Space Invaders is a recreation of the great classic game of the same name by Z-Axis and Activision. It was released on several platforms and was received generally well by the public.

The way the music is stored and played in this game is odd. Music files are stored in .zsd format, which contain a sequence of sounds that are slowed down, and are played at specific times to make the music for each planet. Each planet has its own music, and assigning a planet's music to another can change the way it sounds, from extremely minor to major changes in tempo, pitch, and instrument playback order. It highly depends on which planet it is assigned to. Not just that, the boss music is also stored in these files, so it also changes from planet to planet.

All the music flies start with "SNDSEQ" and are then followed by the first two letters of the planet they will be used on (Example: Pluto Music would be "SNDSEQPL.ZSD"). The exception to this rule is Mercury which is labeled as "SU" which probably stands for "Sun." The second exception to this is the unused music, which does not have a planet (or star) label like the others, it is just named "SNDSEQ.ZSD".

The PlayStation version of the raw file is compressed, so it does not sound as clean as the PC version of the game. In addition to that, playing the audio file through external means is currently not possible, and a tool like MFAudio does not help much. If the raw audio file is slowed down in Audacity to about what the game slows down the music to, you can make out the individual sounds of instruments. It is hard to hear them with the compressed PS1 version of the file, but the PC version sounds fine.

WARNING: The audio in this file is loud. This is what the normal PS1 raw file sounds like:

Since the files cannot be played through external means, the only option is to play them in the game. Testing it out in each planet, the music sounds best in Saturn and Jupiter, they also sound very similar to one another with some differences, most notably in the way they start and the boss music. It is enough to give us an idea of what it should sound like.

This is the unused level theme in Saturn:

This is the unused boss theme in Saturn:

This is the unused level theme in Jupiter:

This is the unused boss theme in Jupiter:

At the start of every level, enemies appear on-screen from the top or the side for example. The game has data for fifteen intro animations and nine go unused. It is strange that they go unused since they work perfectly fine when they are brought back into the game.

These are the nine unused intro animations for the aliens: YouTube link to the Unused Intro Animations

A text file called "strings" is used in the intermission/loading screens, and displays information about the aliens among other things. Inserting an "@" symbol in any part of the text that is called up on-screen will display this yellow triangle graphic. 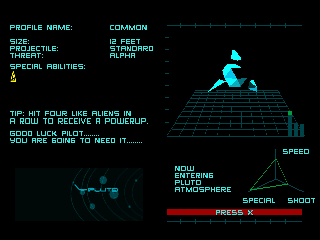