Super Collapse! 3 is the fifth game in the Collapse! series and the first to be released for the PSP and the Nintendo DS.

There are three unused level markers left in the game. The colors of the unused markers correspond to the Countdown (orange), Head to Head (pink), and Continuous (blue) modes, none of which appear during the game's Quest. Either by accident or on purpose, the pink marker that should have gone unused since it corresponds to the Head to Head mode was used to represent a Slider level's marker instead of the purple one. 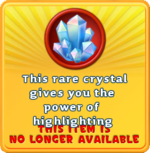 There is a graphic and a description for an item that appears to be equivalent to the "Block Highlights" checkbox located in the options menu in the final game. It costs 200 coins to purchase, but does not seem to activate anything upon purchase. It was likely intended to appear in Lava Levees, due to its crystal theme, and to be purchased later on in the game's quest because of its high price. All of the store's item graphics are stored together in one PNG file and in a horizontal line, with the crystal being the first item graphic in the line. The item appears to have been scrapped early in the game's development, since its four line description causes it to overlap the store's "no longer available" text, which suggests that it was scrapped prior to the store's design being finalized. 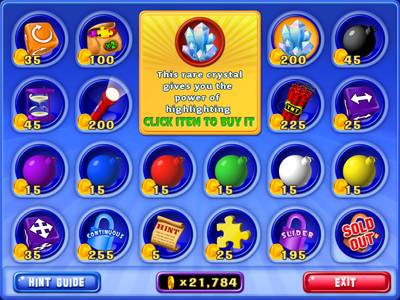 Various settings in the resources have commented out descriptions.

There are several duplicates of these strings in the resource files. The location on-screen of the levels, store, casino, and next world sign, on each world's map are all set using the same coordinate system. The first three numbers in each line are the index number and the x and y coordinates for the item on the map. The name of the level, such as "A Familiar Beginning" is stored at the end of each line in quotation marks. Since the store, casino, and next world sign aren't levels, "Placeholder Name" is used instead. The same applies for the coordinate system used on the world map: nothing on it is a level, therefore all coordinates are labeled "World Map Placeholder Name".

Apparently, the Quick Play mode, here still named "Game Parlor", was not originally available right from the start of the game. Every mode, including Classic, had to be unlocked by playing the Quest. 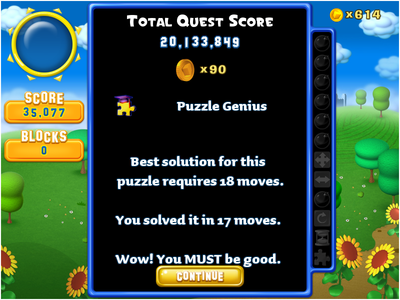 Puzzle levels each have a 'Best solution' which must be achieved to obtain the Puzzle Genius award. If the player manages to find a solution better than what the developers intended, this message will appear. While this message goes unused without hacks on the vast majority of puzzles, at least three - Snowflake 2, Only Two Yellows?, and Boxing Ring - can be solved in less moves than the intended solution.

Evidently, the developers didn't expect this to ever actually play out. The "g" in good actually goes below the set text boundaries and will slightly dip into the area that the "cancel" button resides in.