The Lab is a room-scale VR game/tech demo set in the Portal/expanded Half-Life universe, and takes the form of a series of short minigames designed to test VR technology, specifically Valve and HTC's headset Vive.

Shooter, aka City17Sim, was the internal name for a minigame set in a Half-Life 2/City 17 simulation that would have been a series of six "chapters", starting with a puzzle before progressing through a series of shooting galleries.

Interestingly, the minigame was going to continue to "act" like it was in a simulation or holodeck. Enemies would voxelise on death with no blood, to keep with the other minigames' clean and gore-free gameplay.

The code also references scoreboards and high scores, where after each gameplay chapter a scoreboard would have been displayed, showing your chapter's individual score. At the end of the 6th, the score likely would have been summarised and displayed, tallied on Steam's leaderboards, and the game would repeat to the "Puzzle" chapter, meaning this would have been the only minigame to loop after completion. If you were to die in a chapter, the chapter would have reset from the beginning. If there was a complete failure condition, it is unknown. 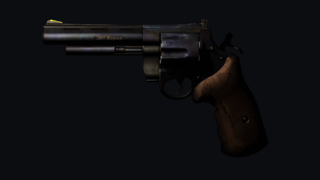 A model and a few textures were found in the files for a revolver, but darker and more aged than the chrome of the classic Half-Life revolver, meaning it wasn't meant for the Shooter minigame. This was meant for an early version of the Longbow minigame, which may have included modern firearms in a medieval setting a la Army of Darkness, minus the chainsaw arm.

The revolver is also present in the Longbow minigame's level, just inaccessible out of bounds.

Code for an M4 and a shotgun were found, supporting both one-handed and two-handed use. While the Shooter minigame might have planned to include Half-Life 2's shotgun, no Half-Life game has an M4. The only other Valve game that has an M4 is Counter-Strike: Global Offensive, but it could have been used as a generic automatic rifle for another minigame.