Portal Stories: Mel is a mod for Portal 2, which was officially approved by Valve and is available on Steam. The player takes on the role of Mel (but not that Mel), a test subject in 1950s Aperture who wakes up far in the future after a failed Relaxation Vault experiment.

A dark gray door handle. It seems like this would appear in the early Old Aperture portions of the game, as it wouldn't really fit anywhere else. 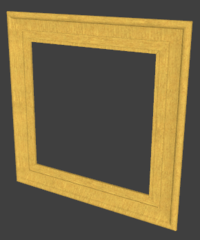 A wood poster frame with a somewhat simple texture. These also look like something for Old Aperture. Despite the name, none of the game's posters really fit inside of this.

A 64x64 unit version of the above model. 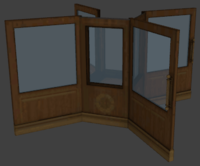 The inner rotating part of a revolving door. This doesn't have correct collisions - concave mode is not enabled, causing the collisions to be "shrink-wrapped". It also has some texture layering issues with the glass, and a somewhat low resolution texture. 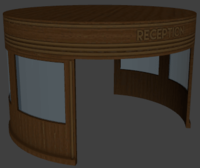 The outer part of previously mentioned revolving door. This also has incorrect collisions. Text can be seen on the model which reads "Reception" and "Exit". No revolving doors appear in the game, although there are several places where this model would fit, such as the lobby entrance in Mel Intro. 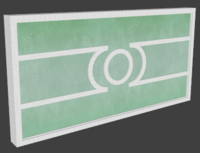 A wall decoration of some sort.

Another wall decoration, in a vertical orientation. 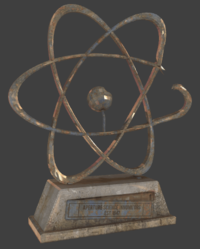 The destroyed version of the big Aperture logo from Mel Intro, as seen in the outro cutscene. This is a pre-rendered video, so the actual model goes unused. 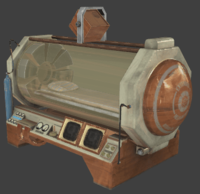 A combined version of the Old Aperture relaxation vault bed model. The final game uses separate models for the different parts of the bed. 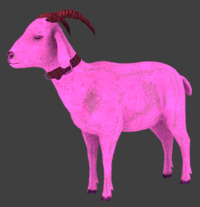 An improperly ported model of a goat NPC, taken from Dino D-Day. While a goat does appear in the game a few times as an easter egg, it uses a different model with a black texture and no animations. This version is textured, but it appears with a purple tint as its lightmap texture is missing. The animations depict it being picked up, carried, and being thrown around by a dinosaur, although some of them don't work properly.

Two of the models used for the tram at the start of the game, tm_stuka_tram.mdl and tm_stuka_tram_doors.mdl, have a second skin which is never used. The texture is simpler and differently colored, there's no 2056 and the Aperture logo is in a different spot.

The AEGIS servers have a white texture, which is colored by the game. However, this functionality is never used, as all servers in the game are set to the same blue color. Developer Anna explained in a Steam discussion that they "experimented with different colors, but found that only having one color improved the gameplay."

Press E To Hire Us, Valve

In the final map of the game, sp_a4_finale, the player is required to fling on top of AEGIS and interact with a hatch, triggering the ending cutscene. The func_button entity which detects the player's interaction is named press_e_to_hire_us_valve. The actual entity is invisible, and this can never be seen in-game without the use of the developer console.

An unused variation of Mel's Story. The map referenced in the filename, sp_a4_factory, does contain a hidden radio. However, it plays a Want You Gone guitar cover instead of this.

An unused track. It is seemingly complete, has a soundscript, and even appears in the soundtrack. However, it's nowhere to be found in the game itself. Judging by the name, this was likely used in an early version of the AEGIS boss fight. Additionally, the tracks are named room1, room2, and room2_serious. The AEGIS boss fight contains two rooms, the second of which is divided into two parts.

A short track similar to the one played when all of AEGIS' servers are destroyed. This unused sound was likely meant to serve the same purpose in an earlier version of the game.

Duplicate copies of the title screen music for Act 1 (Interfacing) and Act 5 (Time and Time Again) exist in the main music folder. The used copies are in the mainmenu subfolder.

sp_a1_garden_jukebox01.wav and still_alive_guitar_cover.wav have soundscript entries. However, they are not used by the entities that play the music, which instead reference the WAVs directly.

The turrets that appear in the Old Aperture portions of the game actually have voice lines! However, turrets cannot be changed from their default voices without replacing them entirely. Thus, these lines go unused. They can be re-enabled with modifications to the game files, but the turrets in the official Old Aperture maps will not use them. They can be heard by placing an old turret in a custom map, or from modern turrets (because they replace the default lines, as stated previously).