In Tiny Toon Adventures 2, Buster and his friends get a mysterious invitation to a new amusement park. You can probably guess the rest of the story from here.

Don't be fooled by the English title: the actual location of Wackyland is nowhere to be found in this game. 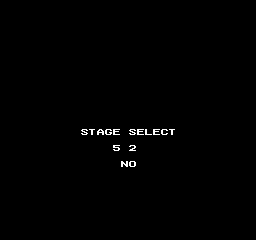 The Game Genie codes ZIKGUSPG + LAXGNIIA enable a level select in place of the title screen in the Japanese version of the game. Press Up or Down to change the stage number, and Left or Right to change the sublevel (note that some stages don't have sublevels, and attempting to enter them will cause the game to crash). Press B to switch between "ON" or "NO", which enables or disables invulnerability, respectively. This screen was removed in all other versions of the game. 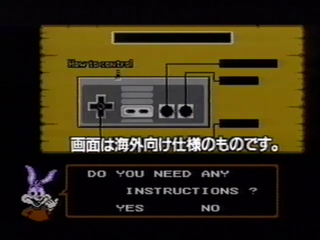 Screencap from a Konami promotional video showing an early, unfinished version of the controls screen.

At one point, the game would have displayed the controls for each ride before it starts. The final game merely gives a short description of the ride.

Graphics for an unused pause screen featuring Calamity Coyote. As with the NES controller above, it would have consisted of a background image with sprite overlays to allow for more colors. No related tilemaps, palettes, or animation data have yet been found.

The ID number that appears on the front of the Japanese cartridge, "RV051", also appears at the bottom of one of the title screen graphics banks in that version. The US and European versions both contain "RD051", which does not appear on either cartridge.