There are two images you uploaded for Super Mario Galaxy at some point that aren't on the page: File:SMGrocketnaruto.png and File:SMGdeviltail.png. Are these used, or did you just miss them when updating the page? If it's the former, I'll delete them. I just want to make sure before I *do*. (Excellent work on that page, BTW. =P) -YK

You can delete rocketnaruto, as I realized it wasn't all that different from the other Naruto switch. As for the Deviltail, I'm unsure. Someone(s?) said they recall it from the game, and the object is indeed a duplicate of models named PoleTop/Bottom, but I have yet to find those in the game themselves. If it is the case that they are unused, that actually makes it a triple unused model. Leave it for now.

Hey, not sure if you noticed, but your excellent Super Mario Galaxy page was given Featured status a while back. I set up a barebones main page featured blurb, but since you're the one who put that page together, it's only proper that you should get to write up the description, select the image, etc. -YK

This probably belongs on Jul, but oh well. T have noticed that the E3 file are empty. I have a theory on where to find the E3 versions of levels with this metaphor (arc names may not be correct, as this is just an example): let's say CloudGarden.arc is a green folder, and E3MovCloudGarden.arc is an orange folder. the orange folder is supposed to have blue paper, but it has nothing. the green folder has purple. Hidden underneath all that purple paper is the blue paper. My theory is that the the "E3Movs" were probably moved to the files of the current galaxies' files. This theory means that Sky Staion's files may contain Blue Grass Galaxy's (http://www.mariowiki.com/Super_Mario_Galaxy_2/Beta_elements#Blue_Grass_Galaxy) files from the E3 trailer. As you can see, Blue Grass is just a prototype of Sky Staion.--Holyromanemperortatan 15:51, 4 November 2010 (EDT)

That's not really how the game file system works. The E3 level files, containing the coordinates and lighting and other details of the levels, are completely gone. There is no hope of retrieving them. Object models, such as planets and enemies, are all stored separately in one big object file directory. There is a chance that some of those models still exist, but there's also a chance they were properly replaced with their final versions. The only way to find out is to look. --Peardian 21:15, 4 November 2010 (EDT)

Oh, that is really unfortunate. Looks like Nintendo learned their lesson about leaving in unused and beta content since SMG1. I'm not sure, but it may be possible to to use level editor to create unused planets and textures from the E3 trailer. Yet again, I may be wrong.--Holyromanemperortatan 21:22, 4 November 2010 (EDT)

Again, that's not really how things work. The level editor only allows you to place objects from the game, not create new models. And if someone were to recreate models they saw in the videos and hack them into the game... well that doesn't really count, does it? --Peardian 21:32, 4 November 2010 (EDT)

I guess that would count. You can find "beta recreations" of SM64 and NSMBDS on Youtube, but I'm not sure if that would work with SMG2 now. Probably in 10-20 years, People will be able to put anything they want in SMG2, even stuff from other games. The only way to find out is to wait for the present to become the past.--Holyromanemperortatan 21:45, 4 November 2010 (EDT)

No, that doesn't count, because it is a fanmade recreation. It is not actual unused content from the game, especially 3D recreations which have a much greater chance of being inaccurate. Even if a recreation of an unused NSMB level is extremely accurate, it is not the real deal. --Peardian 21:58, 4 November 2010 (EDT)

What, if I may ask, was the purpose of re-and-un-stubbing the Phantasy Star article? The edit summaries didn't make any sense, either... =P -YK

When I saw the page, it had the category above the last section, which I wanted to change. By the time I submitted the change to move it, the page had already been edited... twice. So, when I edited it, it undid the other ones. Of course, since I hadn't seen the edits, I didn't realize it had undone anything. XD I went back and fixed it as soon as I realized what happened. :P --Peardian 00:23, 16 July 2011 (EDT)

It's not one program, it's a combination of programs. I use Dolphin to extract the files from the game, then I use szstools to open the packages and bmdview2 to view the models. --Peardian 19:53, 17 May 2012 (EDT)

Will this work for Super Smash Bros Brawl or are there other programs required AK47Productions 20:16, 17 May 2012 (EDT)

Brawl uses a different model format. The tools I mentioned only work with the games that use the same format, including the Super Mario Galaxy games and the Gamecube Zelda games. --Peardian 01:21, 18 May 2012 (EDT)

On the off-chance that you might know something, and still read your user page.. Do you know how to remove the rendered text in the bmdview2 window? I want to take a full clean screenshot but the text ruins the image. --Mugg1991 19:18, 10 June 2013 (EDT)

I've added the unused texture because that one only used the 256 pixeled texture. I've looked in the DN, ON, ONS, PNW, PN, AFN and other stage pieces files that are bsp files made in Renderware and none of those used the 512 pixel sky texture.--Brandondorf9999 12:08, 20 July 2012 (EDT)

Your edit in the NSMB article, it does not seem to change anything and you edit summary does not make any sense. What needed changing? --Hiccup 15:58, 24 August 2012 (EDT)

Hey Peardian, I see you flagged a bunch of images in the Wind Waker section as having HUD junk. That's cool and I can probably get most of the images fixed within a day or so(definitely by the weekend). As you would probably know, those screenshots were mostly taken using the program bmdview2 and that program likes to spit out a bunch of random info on the screen when viewing a model. Below are better images of the early Fado model without the HUD junk. In the first one you can tell it was still taken in bmdview2 with its purple background. In the second image, I cropped out the purple background but otherwise the image is the same as the first. 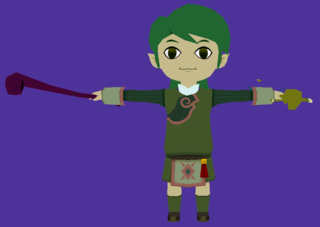 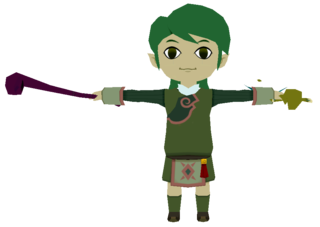 That depends on what you prefer. Personally, I think the purpley background makes looking at the models a little nicer on the eyes, but at the same time it can be distracting. I'd say definitely keep the background for any models that have a lot of white or white details. --Peardian 19:35, 27 February 2013 (EST)

Ah, that is a bit of a relief! I couldn't tell if you also disliked the purple background so I made two versions of the same image to see what you would pick. Keeping the purple background is easier on me since it skips cropping the image. Thanks for the response and expect to see HUD junk on images disappear from TWW page very soon. --Cuber456 20:05, 27 February 2013 (EST)

Done and done. I think I replaced all the images with HUD junk. Now the only thing is what can be done to remove the "This image needs to be replaced for the following reason(s)" tag? --Cuber456 21:35, 27 February 2013 (EST)

Hey, just wanted to thank you for editing my Peachlegs image. It looks much better now. All transparent and happy. :) Robotortoise 00:02, 2 August 2013 (EDT)

You removed most of the Regional Differences section of the Mario & Luigi: Dream Team article and cited this as a reason. What exactly do you mean by this? I thought localization changes WERE regional differences. --AquaBat (talk) 16:21, 12 November 2013 (EST)

There's a difference between changes to the dialogue inherent in the translation/localization process and changes to the story/intention/content of the game made during localization. I'll explain my reasoning on all three of them.
Make sense? --Peardian (talk) 19:28, 12 November 2013 (EST)

This is why I never wanted us to cover JP->(whatever) translation differences in the first place. Any translation worth its salt will change things like jokes/puns and accents so they make sense to (and don't offend) the target audience, and I don't think most of these changes are particularly relevant or noteworthy.
I don't mind making exceptions when things like major plot points or characters are changed/removed, but I think minor nitpicky changes like those in Dream Team are best left to dedicated sites like Legends of Localization. --BMF54123 (talk) 21:48, 12 November 2013 (EST)

Hi, I've successfully embedded Youtube videos on several pages, but they seem to screw with the formatting. I always have to add tons of blank space after the video just to make sure everything looks normal. For example, you recently fixed my edit on Super Mario 3D Land.

Use {{clear}} to prevent text from wrapping around videos and images. You can see the change Peardian made by examining the code of the article. --GlitterBerri (talk) 18:03, 31 May 2015 (EDT)