The third installment in the Darkstalkers series, Vampire Savior struggled with the limits of the CPS2 hardware during its development. Old characters had to be dropped in order to make room for new ones. Nonetheless, a few unused assets remain in the finished game, some offering glimpses into unrealized plans. 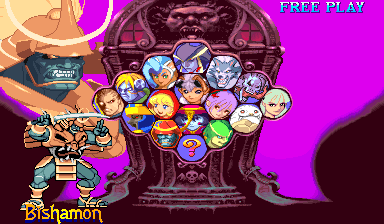 By meeting certain requirements during a single player game, the player can face hidden boss Oboro Bishamon. Normally he is not playable, but setting addresses FF8782 (for player 1) or FF8B82 (for player 2) to 18 will allow the player to select him. He wouldn't become legitimately playable until the next release.

Each of the 5 standard hitspark graphics (light, medium, hard, special, and ES/EX) have an unused frame intended for the beginning of the animation.

Demitri has one unused frame each for both of his jumping light normal attacks. They allow for a looping motion on the active portion of the attack, similar to the previous two games in the series. This became unnecessary due to the active portions of jumping light attacks being shortened to only a fraction of a second in this game as opposed to continuing indefinitely as in the previous two.

A pair of unused lifebar portraits and associated names exist: one for Huitzil (aka Phobos in the Japanese versions), who is not present in this game, and one for an older version of Anita, who has never been playable at all.

According to an interview with producer Noritaka Funamizu in Gamest's Vampire Savior mook, the three characters that were removed in Vampire Savior (Huitzil, Pyron, and Donovan) were actually intended to be in the game earlier in the development process. It would seem that Huitzil stuck around longer than the other two, as no references to them remain in the finished game. It has also been confirmed in another interview in All About Vampire Savior that older Anita was indeed in development as a playable character, but scrapped before the game's release (as was vampire Donovan as eventually seen in the PlayStation 2 Darkstalkers Collection, although no trace of him remains here).

It would seem that at some point in development Huitzil resided in character slot 0B. In the finished game, this slot is used by Lord Raptor while his Dark Force ability is activated. However, on the character select, high score, and other such screens, a leftover Huitzil palette is associated with this slot. Hacking the high score table to include an entry with character 0B will even display his portrait. 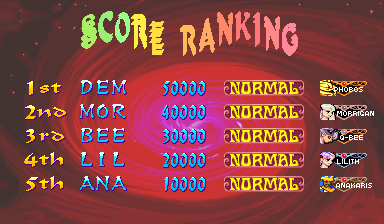 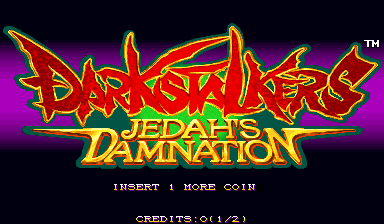 An unused logo featuring the title "Darkstalkers: Jedah's Damnation" can be seen by setting RAM address FF8089 to 01 and inserting a coin. This was the original title for the international release of the game; why it went unused is unknown.

In fact, this unused logo with this unused title can be seen on the game's themed special DLC screen border in Capcom Arcade 2nd Stadium.

In the Japanese release, when someone gets hit red blood will fly out from their body. The international releases changed the color to white.

The fluids used in Jedah's attacks were also recolored in non-Japanese versions to look less blood-like.