A minor update of the previous game in the series, Vampire Savior 2 and Vampire Hunter 2 made some adjustments to the game system and brought back the 3 previously dropped characters. But in doing so it went over the CPS2 arcade system's storage capacity, necessitating a split into two separate games. The two games are identical aside from which characters are missing, and some presentation differences (music and winquotes).

Both Vampire Savior 2 and Vampire Hunter 2 were part of Capcom Fighting Collection, making their debut outside Japan. Whether they would also be presented in English remains unknown; however, both games' previous PS1 ports as part of Darkstalkers 3 were translated properly.

Contained in the graphics data are what appear to be icons and cursors for an alternate character select screen. These were later used in the Chaos Tower mode of Darkstalkers Chronicle: The Chaos Tower. 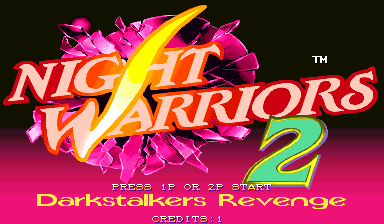 Setting RAM address FF8089 to 01 and inserting a coin in Vampire Hunter 2 will display a Night Warriors 2 logo, presumably intended for an unrealized international release.

Huitzil has one frame each in his standing medium punch and jumping light punch animations that go unused.

Huitzil has 3 unused frames of animation that form a recovery motion from his Genocide Vulcan special. These go unused, and the game simply plays the move's startup frames in reverse as a recovery motion instead.

Three unused voice clips for Donovan, presumably intended for Kill Shred, Efreet Sword, and Blizzard Sword respectively. They are stored at a higher bitrate than most other voice clips, implying they are a left over from quite early in development.

The following French language dialogue is actually used as part of the intro sequence, but at such a low volume that it is very hard to make out over the music.
"L'ennemi. (The enemy.)"

"Notre peuple est ennemi du tien. (Our people is enemy of yours.)" 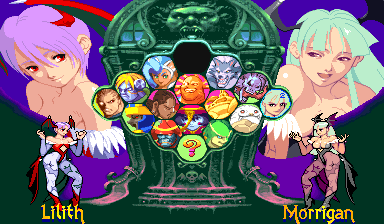 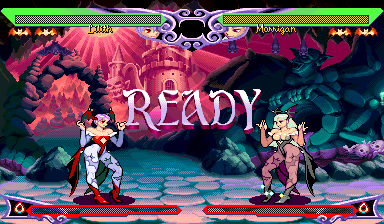 The code for all 18 characters exists within both games, and the supposedly missing characters of each game are more or less playable, albeit with no graphics or voice clips. However, Lilith's graphics are intact in Vampire Hunter 2, making her perfectly playable aside from having no voice. Her voice clips actually do exist in the raw PCM data, but they have no instruments defined and are thus inaccessible.